It's been a while.  The wingnuts have been just so boring lately.  Oh well, here goes:

Today's Wingnut Wrapup is respectfully dedicated to Malheur occupier Shawna Cox, who has filed a $666 billion dollar lawsuit against the Federal and State governments for being in league with Satan.  It will be most interesting to see how that fares in court.  She is currently locked in a tight competition for Least Likely Lawsuit to Result in a Win for the Plaintiff, with the Kalamazoo Uber driver who went on a killing rampage, and is now suing Uber for $10 million because it caused him to murder six people by making him work too much.

Larry Kudlow, Town Hall:  "A Growth Message, Not Catfights, Will Propel the GOP to November Victory"


Unfortunately, Larry, catfights are what you've got.  Or maybe ratfights.

Donya Jam, Town Hall:  "US and Europe Should Recognize Iranian Elections as a Sham"


Great.  Right after we recognize the "election" of George W. Bush as a sham.  Deal?

Jeff Crouere, Town Hall:  "The Perils of Papal Politics...Pope Francis is a man of great compassion and humility. He shows tremendous concern for the young, the elderly and the sick. He advocates for those who have been forgotten, such as the homeless. He has shunned the luxuries and trappings of his position and performs his duties in a significantly more modest style than his predecessors. These are admirable qualities and set a good example for all Catholics.'


But it turns out that it is a really horrible thing when these concerns get in the way of the Republican party.  Then, he should just shut his God damned mouth and go home.

"Instead of lambasting Castro and the other socialist tyrants of Latin America, Pope Francis focuses his rhetorical fire on advocates of capitalism and politicians such as Donald Trump"


Industry.  Now abortion is an "industry" instead of a medical procedure, or a right of women.  Well, at least this is a step in the right direction- if it's an "industry" the Republicans will soon be all for it.


A woman with a Muslim name.  This is a really wonderful turn of events.  Right wingers threatening FBI agents and others with actual guns right in front of their faces- well, that is just their right as Americans.

Mark Ellis, PJ Media:  "Is it Time to Make 'Hard Time' Harder?  What if life without parole included hard labor?"


You know, sometimes it's hard to believe that these idiots actually say things like this.


Whoa!  Grifters attacking each other!  And this could have nothing to do with both of them trying to keep themselves in front of the cameras now, could it?  No, it is a vital struggle over the nature of the nation's political life.


Yes it is, Mark.  It's the choice of people that you have been egging on for years to abandon their sense and go with anger and hatred.


No sir.  It can only be changed by Jenn Giroux.  Once she has made up her mind, the issue is closed.  The Pope has nothing to say about the Church's position.  Unless, of course, he agrees with Jenn Giroux, in which case he is free to do whatever he wants.  Notice that none of these jackasses ever had a complaint about the fascist, ex-Hitler Jugund, child abuser enabling guy who was the previous Pope.

Daily Caller:  "Jenner: 'I get more flak for being conservative than being transgender' "


And a good thing too.  Being  transgender doesn't threaten us all with annihilation.


Progressive.  Of course, Jim Hoft claims every mass shooter was a progressive, even the guy in Charleston that posed with pictures of Confederate flags and then killed nine black people.  Actually, as it turns out, Jason Dalton used to work for Progressive Insurance.  That's his resume as a progressive.

Don't wait for an apology from Jim.  The truth means nothing to him or his readers.

Paul Driessen, Town Hall:  "Needed: Economic Literacy 101...Americas 18- to 34-year-old millennials have been tutored in group-think schools that extol socialism. Now they lionize Bernie Sanders, whose class-warfare prescriptions include taxing away all but maybe 1% of the nations 0.0001% billionaires wealth, then going after Wall Street, Big Business (and) millionaires..."


Right on, Bernie.  That would be a start, anyway.  When do we get to the guillotines?

Larry Kudlow, Town Hall:  "Two-Percent Growth Is a Loser for the Angry Middle Class But where’s the GOP solution?"


There is none.  Isn't it time you got Thomas Piketty's book off the shelf and actually read a few pages of it?  The only way to get more than two percent growth, if the whole history of civilization is any indication, is to have the world economy devastated by a depression and a couple of world wars first.  Then, you can have four percent growth, until the economy recovers, after which you are back to the universal constant: two percent.  Claims you can produce long term growth greater than that are at best ignorant, and at worst dishonest.


Great- an endorsement from a governor who claims that his State's greatest threat is from black drug dealers coming in to rape white women.  Gee, I wonder why he might be for Trump?


Ha.  Twenty years of endless lying and smears from Fox News, and this is what they are unhappy about- Fox isn't being fair to Trump.  What a bunch of idiots.


Right.  These people will tell themselves anything, and demonize anyone, to avoid having to face reality.

Janice Shaw Crouse, American Thinker:  "How Did We Get Obama and Trump?  How did we get to the point that it was possible for Obama to be elected and for Trump to be a serious contender for the presidency?"


No word on how the Bush administration underestimated world non-powers Iraq and Afghanistan.


Glad he put that all in caps, so we all knew how serious an issue it is.

And how about a little more, just to make sure we got the message:

"Christians in support of Trump must now face a difficult decision. Support and assistance to the Trump campaign will now become direct disobedience to God and the scriptures. The time has arrived for complete honesty. Jerry Falwell Jr., Pat Robertson, Robert Jeffress, Kenneth Copeland and any other Christian leaders or pastors who continue to openly support and defend Donald Trump’s bid for president will be in direct defiance against God.
Christians, who insist that Trump is the man, will henceforth be calling for our nation to be “cursed.” (Gen 12: 3)"


Well, we don't want the nation to be cursed, do we?  Better vote for Hillary or Bernie.


Great.  Let's hope they are also committed to stopping Obama from handing Gitmo to the Martians, since that is equally likely to be on his agenda.


Oh my God, will we ever recover?!!?  How did he cheat?  He talked to his campaign manager during the breaks.    Moe continues:

"We will now pause while Trump supporters desperately try to find past examples of an actual Republican doing something similar."


You bet we will, Moe.  Remember this? 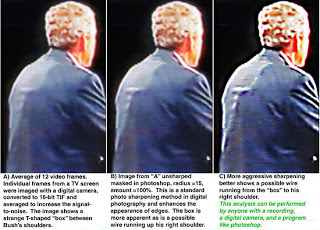 That's a picture of George W. Bush wearing a receiver during a Presidential debate, because of course the idiot could not be expected to answer questions on his own.

Dan Joppich, American Thinker:  "Why exactly should we vote for a candidate?"


Because if you vote for a walrus, your vote won't count?


You know, I read this entire article.  It's so stupid that I can't even be bothered to make fun of it.  Oh well.  Jonah Gpldberg- what do you expect?

Michael Walsh, PJ Media:  "Dems in Panic Over Hillary Candidacy: 'Our Nominee Is a Disaster'

Cliff Kincaid, Renew America:  "Hate is the essence of socialism"


The above two quotes just to remind you of how, with nothing else to offer, Republicans have been reduced to just blaming Democrats for their own sins.  Sad to say, it seems to work with a lot of people.

Thanks for reminding us that the insanity extends far beyond just Trump.