The Clown Car Rolls On

April 27, 2015
Republican public comments lately have spun so far off the rails that I have trouble keeping up with them via normal posts.  So, I want to try something a little different here: a sort of Wingnut Wrapup of allegedly responsible voices from Republicans and the mainstream press, which are as idiotic as the stuff I find at right wing websites, but far less forgivable, since they come from people who actually have the power to see to it that their vile agenda is actually enacted; as well as a little miscellany that is related to the subject.  All of this is from today, collected by me in a half hour or so.  So, let's get on with it.  I'm bookmarking a lot of it, as opposed to my normal practice with wingnut blogs.  I don't want to give the blogs the hits, but these people need to be held responsible for their behavior.


Ha ha, caught us.  We're going to build an electoral majority in the U.S. made up exclusively of Muslims, atheists and Buddhists.  We'll be taking back the White House some time around, say, the year 2310.  But boy will things be great then.

And this vital news, from the people who really know how our democracy is supposed to work:

"Religious leaders are calling on members of the Supreme Court’s liberal wing to recuse themselves from the blockbuster gay marriage case that the court will begin considering on Tuesday."


Because if you don't agree with me you don't have a right to an opinion.

And here's an interesting map, from Fixr, via Daily Kos, of each State's largest import: 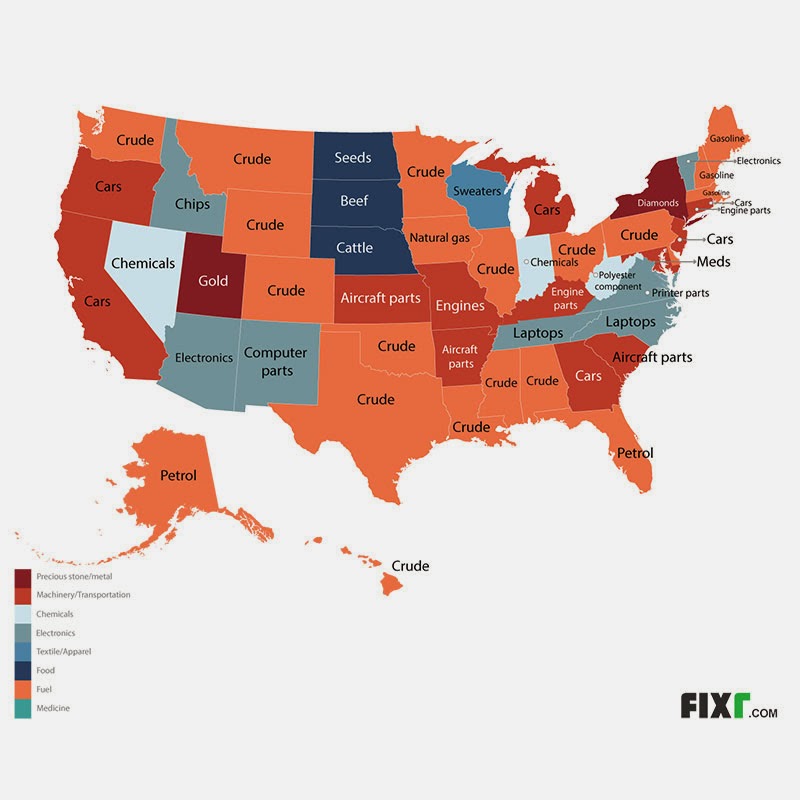 I was interested in that whole swath through the middle of the country and the South, of heavily conservative States whose main import is oil.  And, if you can believe it, the biggest import to Wisconsin is (!) sweaters.  I guess Governor Walker has damaged the economy there so much, people can't afford heat any more.  And here's an item that could serve as the basis for a good (and possibly true) conspiracy theory: Utah's main import is gold.  Also, I can't help but wonder if the statistics for Nevada's main import, chemicals, includes crystal meth.  If so, it would all make sense.

And this, from the New York Times:

"Ian Reisner, one of the two gay hoteliers facing boycott calls for hosting an event for Senator Ted Cruz, who is adamantly opposed to same-sex marriage, apologized to the gay community for showing “poor judgment.”
“I am shaken to my bones by the emails, texts, postings and phone calls of the past few days. I made a terrible mistake,” wrote Mr. Reisner."


Like, you couldn't have figured out that supporting Ted Cruz was a terrible mistake all on your own, Ian?  What you did was not a mistake, it was a grotesque, self serving betrayal of not only your fellow gays but of all Americans.  So, apology not accepted, until you apologize for what you really did.  (Hint: readers, don't hold your breath.)

And, a reminder of why a black guy won the Presidency:

George W. Bush:  “In order to be an effective president ... when you say something you have to mean it,” he said. “You gotta kill em.”


Which worked so well.

And now this horrible news:


Of course, police officers have actually been taking out black males for years, but no one cares about that, I guess.

And finally, this important item from Scientific American:


If only we could say the same about Dick Cheney.