Iran- Let's Not Forget the History

April 03, 2015
You just can't appreciate what a great accomplishment Obama's successful negotiation with Iran has been, without remembering a little of the history between our two countries.

Particularly the story of Mohammed Mossadegh. 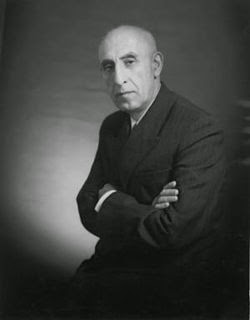 Mossadegh was the head of a democratic government in Iran, elected in fair and open elections.  This was too much for the United States to bear, so in 1953, he was removed from power in a coup orchestrated by the CIA.  He spent the rest of his life in prison or house arrest, for the crime of having been chosen by his people to lead their country.

The result?  The Iranians suffered through decades of rule by Shah Reza Pahlavi, a vicious, brutal dictator easily as bad as Saddam or Khaddafi.  His secret service, the SAVAK, was responsible for the torture and murder of thousands- the exact number will never be known.  And through all of this, the Shah was maintained firmly in power through US military aid.

And the consequences of that aid?  No one in the Middle East had the power to unseat the Shah except the well-organized and financed Islamists, so, to add insult to injury, our pet dictator ended up being replaced by a government of religious fanatics, which has plagued the Iranian people, formerly quite secular, ever since.

American warmongers, naturally, expect the Iranians to just forget about this sixty years of misery at our hands. These are the same Americans, of course, who still cannot forgive the Federal government for taking away their right to own other people, which happened a century and a half ago.  Well, it's hard for Iranians to forget about things when they are still happening, so it really is pretty amazing that Obama so far overcame their understandable and legitimate contempt for our country, as to get them to go along with this agreement.

And once again, right wing warmongers cause us untold misery, and then count on Democrats to undo the damage, while attacking them every step of the way.

Infidel753 said…
Thank you for posting about this. I'd been meaning to do so. The overthrow of Mosaddegh probably has had more impact on Iranian-US relations than anything else since then, yet I imagine most Americans know nothing about it.
April 3, 2015 at 6:15 PM

Marc said…
A coworker was ranting about how we can't trust Iran, and I asked him if he knew about Operation Ajax. Blank stare, and then 'what does that have to do with Iran?' I gave him a brief outline, and told him he could go more in depth, and research it himself, if he wanted. I doubt he did, but at least I tried to educate him.
April 4, 2015 at 5:31 PM

Jerry Critter said…
Of course we don't trust Iran. If we trusted them, we would not have to negotiate with them. Not trusting is the reason we have verification built into any agreement.

And loosening sanctions had nothing to do with it?

Green Eagle said…
That's called negotiation, dumbass, they give up something and we give them something they want.
April 6, 2015 at 6:41 PM