In a an effort to help make the Trump administration a success, Green Eagle wishes to make the following proposal.

Why can't we build the wall out of coal?  This will allow Trump to keep his promise, and at the same time he will keep another promise by giving years of work to coal miners, digging up enough coal for a two thousand mile long, thirty foot high wall of coal.  This is an eminently practical suggestion, as shown in the following photo from 1907: 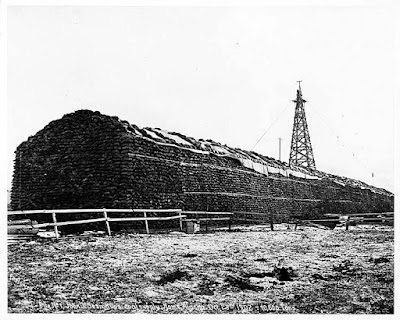 Trump only needs to tell his base that this picture shows a part of the wall that is already built, and he is almost guaranteed reelection in 2020, even if he is in prison.

The only slight flaw I can foresee is the remote possibility that some Mexican vandal might light the wall on fire; however the pollution caused by a two thousand mile long coal fire will drive liberal environmentalists so crazy that it will be just as much fun for wingnuts as if the wall were still there.  A win-win for everybody!  And believe me, as long as the wall is still burning, nobody is going to try to cross it.
Posted by Green Eagle at 9:56 AM

Trump would also be hoping that nobody in Mexico knew how to walk over a 30-foot hill.
Ultimately, the wall idea is stupid because most undocumented people are those that entered legally as a tourist and overstayed. So all this week's GOP chatter about border security is just posturing, as we all know.