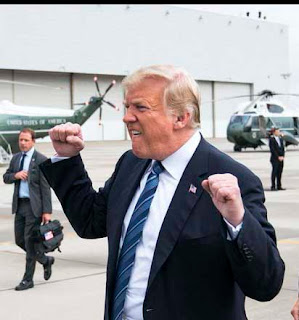 "Democrats can’t find a Smocking Gun tying the Trump campaign to Russia after James Comey’s testimony. No Smocking Gun...No Collusion.” @FoxNews  That’s because there was NO COLLUSION. So now the Dems go to a simple private transaction, wrongly call it a campaign contribution,..."


Everyone else commenting about this treats it as a joke, but not me.  The so-called President of the United States can't even spell the word "smoking."  And it's not a typo, because he spelled it wrong twice.

Our leader, the most powerful man in the world, is essentially illiterate.  He doesn't refuse to read briefings and memos, as has been reported; he can't read them.  His mind functions on the level of a six year old, both intellectually and emotionally.  And that is just fine with Republicans, as long as they can manipulate him into doing what their rich backers want.

Well, that's where we are as a country today.