November 28, 2018
There is just no end to the abuse of his position committed by the President of the United States, no end to the contemptible behavior he is willing to engage in.  But today marks perhaps the most degraded public misuse of his power of all.  Today Donald Trump published the following graphic on Twitter: 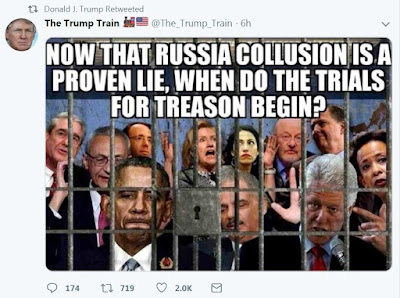 The President is demanding, in this graphic, the trial for treason, without a shred of evidence, of two former Presidents, a former Secretary of State, the special prosecutor who is investigating him, two former attorneys general, and a number of other people.  In brief, he is demanding the right to imprison or even possibly execute people for no other reason than their opposition to him, or their having been members of the opposing political party.

Is there a person alive who can now deny that this man is trying to establish himself as a dictator?  When is the point that the members of his own party react in a decent manner and put a stop to all of this?

Sad to say, the answer to that second question is probably, never.  The leadership of the Republican party has been carefully chosen and installed in their places by a handful of sociopathic billionaires whose clear goal is to turn this country into an oligarchic dictatorship that serves only their interests.  And these political figures know that, after having accepted the devil's shilling, they will be destroyed if they act responsibly.  And since they were selected for their willingness to mindlessly comply with the worst, most evil elements in the country, they will march en masse in the vanguard of destruction.

After a half century of propaganda and choking off real media, the Republicans have reached the promised land.  They have created a voting base that is so enraged and filled with hate that it will do their bidding and keep them in power.  So, this is what we end up with.  How easy it has proven to destroy everything that made the United States different from other countries, and leave behind nothing but naked fascism.

bluzdude said…
That picture should indeed come to pass, but from the perspective of Trump looking out.
November 29, 2018 at 5:53 AM

One Fly said…
As you know I see this as the same as you. I swear what you write today is the reality.

To me the reality of this man to have never stated anything intelligent blows me away that "they" believe in this.

I just don't have a clue how to describe the severity of this situation and if you go there many think you are half nuts.

I realize now how I must have been seen in the lead up to the war in Irak that it was lies using info I learned from Democracy Now and a couple other places. He's crazy that's what.

Even for those on the Left to take it to your level is just too far for most of them probably.

Anonymous said…
I completely agree with you and One Fly. I'm terrified to be honest with you. In order for me to survive, there are days I have to shut down. Those days are happening with much more frequency.
November 29, 2018 at 7:55 AM

Green Eagle said…
I know a lot of people that feel that way, Anonymous. That's part of the plan, I am afraid-make things so ugly that people just can't afford to think about them any more.
November 30, 2018 at 5:56 PM