November 08, 2018
But of course, who would expect anything different...imagine an Attorney General whose contempt for the law makes the execrable Jeff Sessions look not so bad in retrospect.  Well, we've got him. 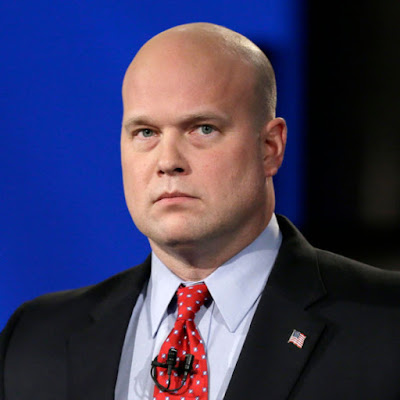 Trump has, in apparent open defiance of the law,* named one Matthew Whittaker to be our new "interim"  Attorney General.  Whittaker was a failed candidate for a county judgeship before he was snatched up by Trump, given an administrative role in the Justice Department, based apparently solely on his open opposition to the Mueller probe, and here he is, a year later, serving as Attorney General.  Here is some more information about him.

First, from an article at Daily Kos, which I most urgently suggest you read, some other information beyond the fact that he has attacked the Mueller investigation repeatedly:

"Whitaker was behind a secretive group that stepped in to protect members of the Trump campaign from allegations of meetings with Russian officials. That included trying to distract from the fact that Jeff Sessions lied about his meetings with the Russian ambassador in Senate testimony...The organization was also connected to spreading rumors that Christine Blasey Ford mistook Brett Kavanaugh for another high school classmate.


When not busy interfering in the Russia investigation, Whitaker also kept busy promoting a patent scam. As Miami New Times reports, Whitaker wasn’t just on the board of a company selling would-be inventors worthless (and nonexistent) “worldwide patents,” he also sent threatening letters to a former customer of the scam who complained about being taken for tens of thousands of dollars."


A criminal and a thug, behind not only the most malicious type of Republican behavior, but actual corruption reminiscent of that repeatedly engaged in by Trump himself.  What a great choice for Attorney General, huh?

And here is another read I recommend, by Ian Millheiser at Think Progress, covering an interview Whittaker once gave:

"In a 2014 interview, the man Donald Trump just picked to run the Department of Justice appeared to claim that Social Security is unconstitutional and that basic labor laws like the minimum wage must be struck down...Whitaker launches into a Trumpian rant against “chain immigration” and “people trying to bring illegal people and illegal drugs into our country.” He claims that climate change “doesn’t appear to be that significant or quite possibly isn’t man made,” and calls for the Department of Education to be “disbanded.”


"There are so many (bad rulings)...All New Deal cases that were expansive of the federal government. Those would be bad. Then all the way up to the Affordable Care Act and the individual mandate."


In other words, the Republican dream position:  Every single thing the Democrats have done for the American people in the last hundred years is unconstitutional and must be abolished. What an understanding of the rule of law in this country.  As I said, Trump's perfect pick for Attorney General.  I wrote a few days ago suggesting that in the coming two months, before Democrats can take over the House, we are going to see massive Republican atrocities such as the country has never had to experience; this is just the beginning.


*The rules for appointing an interim cabinet officer without Senate approval require that the person selected has been previously approved by the Senate for some other government appointment, which is not the case with Whittaker.  But of course, what do rules mean to a "President" who think he can unilaterally cancel parts of the Constitution?

Jerry Critter said…
I believe there is an exception the requirement that the interim person has been previously approved by the Senate if he is a high level person with a GS-15 or high rating. I suspect that Whittaker is a GS-15 or higher.
November 8, 2018 at 12:03 PM

Jerry Critter said…
An ethics complain has been files with the DOJ demanding Whitaker’s recusal. https://s3.amazonaws.com/storage.citizensforethics.org/wp-content/uploads/2018/11/08205934/Whitaker-recusal-letter_final.pdf
November 8, 2018 at 2:11 PM

Anonymous said…
I think It will be good for our national conversion when he declassifies the fisa warrant. Might get to the bottom of the Russia investigation. We need transparency. If Whitaker prosecutes the crimes in the DOJ and FBI...we'll be in good shape.

Then the wall and repealling birthright citizenship and ending all foreign aid, starting with Israel. Rosenstein is going to be fired and antifa will lose their federal protection. It's the beginning of the end. Ginsberg is going to leave the SC, so you know its going to be a guy that scares Kavanaugh with the current R senate majority. Dare I say: this guy is literally the harbinger of "helicopter rides."
November 11, 2018 at 1:31 AM

Green Eagle said…
I just don't get that many comments any more from repulsive Republican liars and haters, so thanks, Anonymous, for reminding me of the good old days. P.S.- off your meds again?
November 11, 2018 at 2:31 PM

In what universe? Trump has already requested an increase in 2019. Israel is a US ally.

"It's the beginning of the end."

Green Eagle said…
It is important to remember (or learn the first time for these right wing anti-Semitic jerks) the following. Israel "receives" around $3 billion a year in foreign aid from the US. A small amount of this is distributed to Israel, as with many other countries, to deal with refugee issues. The overwhelming majority is military "aid," of which not a penny ever leaves the United States; it is all paid to US military contractors to give equipment to other countries, and is really a subsidy to them, not the state of Israel. That is the real reason why this military aid will never stop as long as Republicans control the government.

In any event, at the present time the Israeli GDP (estimated for 2018) is about $374 billion, so this military aid represents about eight tenths of one percent of that figure, or hardly enough to even be noticed in the Israeli economy. The ignorant commenters that are thinking that we could really damage Israel by denying them that three billion are fools.
November 19, 2018 at 12:00 PM