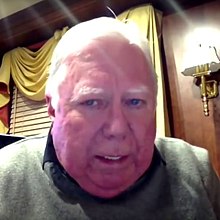 Jerome Corsi has become the central figure of the week in the Mueller investigation.  You'd think that this would induce the media to look a little farther into his past.  But other than mentioning that he was the prime originator of the lie that Barack Obama was born in Kenya, little has been mentioned about him.  Here is a helpful list of a few of the other malignant smears Corsi has promulgated:

Corsi was the author of the book Unfit for Command, which detailed a totally false account of John Kerry's record in Vietnam, where in fact he was a highly decorated officer, as his publicly available military records showed.  This smear, carried almost without pushback by the mainstream press, was responsible in large part for the re-election of George W. Bush.

Corsi published a book in 2005 spreading a totally made-up horror story about Iran's supposed stockpile of nuclear weapons.  This makes him a seminal figure in today's current anti-Iran hysteria.

Corsi has spread absolutely unfounded nonsense about a supposed "North American Union" which Democrats intend to replace the United States, feeding into the xenophobic fear which makes up so much of the hatred that drives the Republican base.

Corsi has been among the leaders of 9/11 conspiracy mongering.

Corsi spent years writing for World Net Daily, a perennial favorite at Wingnut Wrapup, and worked for several years for Alex Jones.  Those are two of the greatest sources in the country of right wing lying propaganda.

Well, today Corsi said, in response to being offered a plea deal by the Mueller team, " I’d rather sit in prison and rot for as long as these thugs want me to."  Given his history and the damage he has done to the American people, that just might be a good deal.

Green Eagle said…
I wonder if a lifetime of hateful behavior has something to do with the appearance of guys like this and Steve Bannon. It's probably some clearly identifiable fallacy to think that an eaten away soul can lead to this, so it's too good to be true.
November 27, 2018 at 10:28 AM

Green Eagle said…
Oh, by the way, to me he does not look like a Batman villain. He looks like a villain in some low budget knockoff of Batman that has a Rotten Tomatoes score of 8%.
November 27, 2018 at 10:30 AM