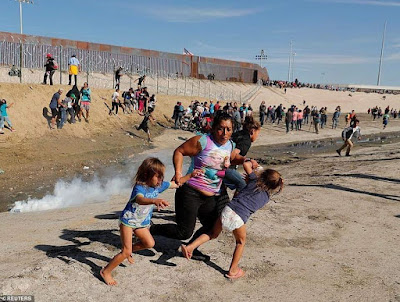 Immigrant children being attacked with tear gas.  From what I have read, I understand that this is CS gas, a stronger version of tear gas than the CN gas normally used by police in the United States.  This gas was shot into a foreign country in what is unquestionably an act of war.  The use of CS gas against civilians in any circumstance has been classified as a war crime since the mid 1990's.  Trump has made all of us complicit in this war crime.  It is hardly the first time for a Republican President; don't forget the use of torture by the Bush administration.  That was unforgivable, but at least it was not directed toward children and their mothers.


In the interest of full disclosure, during the Vietnam protest area, I was tear gassed many times, both with CN gas and a couple of times with CS gas.  CN isn't so bad; after the first couple of times it hardly slowed me down at all.  CS is another thing entirely, let me assure you.  It is extremely painful and almost totally debilitating while the effects last.  The notion of deliberately using it on children is an abomination.

Update:  And who could have predicted?  A few hours later, and Republicans are already claiming that this picture is posed.  Here is an "annotated" version of this photo, of an event that took place in front of a massive press presence, ludicrously claiming that it is fake news: 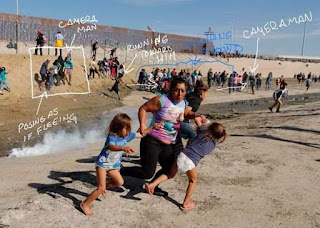 I'm not even going to bother explaining how idiotic this is.  It does, however, demonstrate how absolutely malicious the Republican denial of reality is.

He also told the military that a rock should be considered a rifle and he gave official permission for the military to use lethal force against anyone trying to cross the boarder illegally.

Gas children! Next he will shoot children!