The Trump Juggernaut Moves On!

September 10, 2018
Once again, Green Eagle has a chance to report on the massive pro-Trump movement around our land.

"A big pro-Trump rally called “The Mother of All Rallies” (or MOAR for short) is taking place (Saturday) in Washington, D.C...The MOAR rally began its opening ceremonies at the north end of the Mall, near the Washington monument, at 11 a.m. Eastern, according to their website...The organizers originally wanted one million people at the event."


Here are a couple of representative photos of the massive crowd: 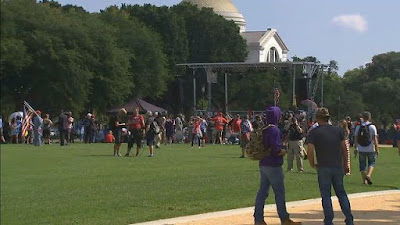 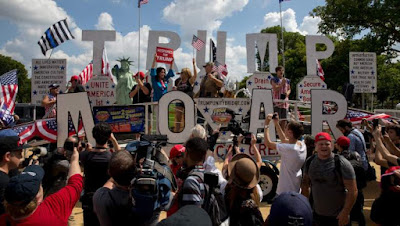 One million people?  Well, they fell about 999,800 short of their goal.  Close enough for winguts to declare victory, I guess.

Technically, does it still count as a HUGE rally if most of the scant crowd who showed up there are seriously overweight?"

Claude Duval said…
More of them would come, but they were scared to take the subway once they saw the Black person in the information booth.
September 10, 2018 at 10:33 PM

bigmike said…
What, the remainder of the missing people could not get their weekend passes?
September 11, 2018 at 8:26 AM