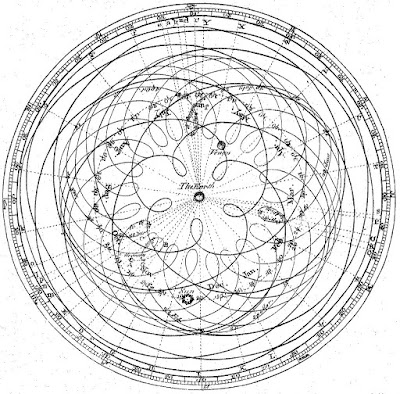 As most people are aware, until well into the Renaissance, it was the common belief, at least in Europe and the Middle East, that the sun, the planets and everything else revolved around the earth.  This widespread belief came to be attached to the name of one Ptolemy:


"Claudius Ptolemy was a Roman astronomer who lived in Alexandria, Egypt, in the 2nd century AD. His attempt to explain the motions of the celestial bodies became the accepted theory throughout Europe and the Middle East for almost 2000 years. Only during the Scientific Revolution of the 16th and 17th centuries did people such as Nicolaus Copernicus and Galileo Galilei call the Ptolemaic model into question.


According to Ptolemy, the earth sat in the center of the universe with all of the planets (including the sun and the moon, which were also described as planets during this time) sitting within nested crystalline spheres surrounding the earth. They were ordered according to the amount of time necessary for the planet to make a single observed orbit. Thus, the moon was the closest, then Mercury, Venus, the Sun, Mars, Jupiter and Saturn. (Uranus, Neptune and Pluto were unknown at the time as they can only be observed by telescopes, which were not invented until the Scientific Revolution.)"


As scientists and philosophers calculated with more acuracy the movement of the sun and the planets, it became harder and harder to account for their paths, based on the assumption of a universe centered around the earth; but of course a sun-centered solar system was anathema particularly to religious people who insisted, often violently, on seeing the whole universe as centered around themselves and their myths.  The result of this false belief can be seen in the illustration above, which shows the complexity that resulted from the belief that the Earth was the center of the solar system.  This was true even though the sun-centered view did so much to simplify understanding of the motions of the planets, as can be seen by this drawing from the time: 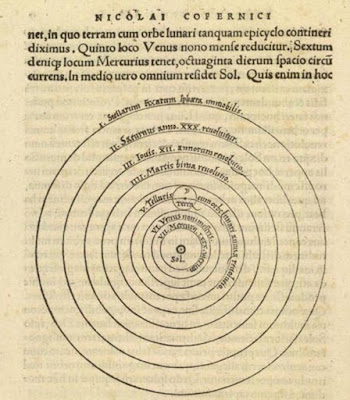 The solar system of Copernicus


Why am I harping on this old piece of information?  Because I believe we are seeing a modern version of the epicycles playing out in front of our eyes in the claims, currently almost unbelievably popular on the right, made by some unknown person or entity known as QAnon.  I am sure most of you have heard of this unified field theory of right wing conspiracies by now, but if not, it involves a high ranked government official, perhaps Donald Trump himself, posting hundreds of cryptic remarks at 4chan, perhaps the most unlikely site to report anything true anywhere on the internet.  These posts, laced with numerology and endless other virtually unintelligible content, are interpreted to "prove" that Robert Mueller is working for Donald Trump, and they have prepared secret indictments against tens of thousands of Democrats, Muslims, Communists, reporters, FBI agents, people who work in Hollywood, and anyone else who has stood up to Trump, led by (of course) the Clintons, George Soros, Obama, the Pope and the Rothschilds, claiming that they are guilty not only of a treasonous campaign to destroy the United States, but of being involved, every one of them, in a massive worldwide child pedophilia, rape and murder scheme, as part of their worshipping of Satan.  Within a couple of months, it is asserted, these people will all be hauled off to Guantanamo Bay and executed. 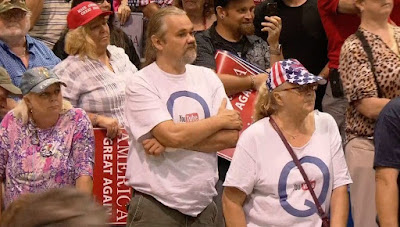 I can't say with any confidence that this is the furthest into derangement that these people will sink, but it is certainly the most insane specimen of mass wingnut paranoid delusion I have seen in my half century of following the right.  Nevertheless, this is the sort of political Ptolemaism to which Republicans have to resort at this point, to make their leaders out to be the good guys.  I don't imagine they are likely in the near future to reconcile themselves with reality, the way the Church finally did about the heliocentric view of the solar system, but I am extremely concerned with how much farther this mass of delusions can be stretched to cover the ever increasing evidence that they have all been conned by criminals and traitors, and how many of them will be reduced to a state of mindless, violent rage by the inevitable collapse of their mass lunacy.

We've seen that no amount of agitation, racism and hatemongering has at this point driven the right to any more than very minor outbreaks of violence; they are mostly too lazy, old and stupid to really mount any serious disruptions.  I am afraid, however, that the collapse of their lunatic delusions could drive a lot more of them over the edge into the mixture of neo-Confederacy and out and out Nazism that really would pose a threat to this country and the world.  I do not see how these people can continue to hold their lunatic patchwork of crazed beliefs together more than a few more months; as it becomes obvious that Mueller is not in league with Trump, it may prove impossible for them to avoid falling prey to the incitement to violence which is now a standard part of Republican policy.


But Wait! There's More!  Via Digby, I bring you  this chart of absolute insanity claiming to represent all the QAnon conspiracies in on grand place: 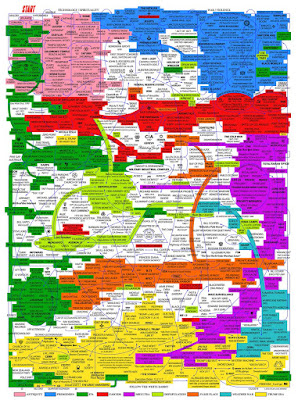 I had to import this image into Photoshop and zoom in to read it in all its lunatic detail.  This thing makes the epicycles look like a rational explanation of reality, and yet it is not far off from the basic "understanding" that lies behind the thinking of the people that are running our country.  God save us if the Dems do not take over the House in November.
Posted by Green Eagle at 5:44 PM

There are times when I wish this blog had a 'like' button. Often there is little to add but much to be gleaned.

I'm afraid there will be violence. These people are nuts. I'm comforted knowing I have less time than more time.

I wish to note that I deleted two comments by someone that I regard as nothing but a troll, as well as my reply to one of them. I don't post that much these days, and it bothers me that the minute I do people like this are right there to try to turn my posts into nothing but an opportunity to show how much smarter they are than me. I stopped comment moderation a while ago for a technical reason and I hope that I don't have to go back to it.

I think there may be such a thing as a 'normal' conspiracy theory, like 9-11 Truthism, where people put up a hypothesis or ask a question or otherwise interrogate the normal account of an event. Q-Anon however is just swallowing the bullshit narrative of an un-named source on un-verifiable info, and swallowing it whole, and wearing a T-Shirt for it, FFS. It doesn't really deserve the term "conspiracy theory".

I don't think there will be a moment when they realise they've been conned. That would involve a capacity for objective thought and the understanding that opposing realities cannot both be true... they'll all just move on slack-jawed to the next malicious idiocy.

"Only during the Scientific Revolution of the 16th and 17th centuries did people such as Nicolaus Copernicus and Galileo Galilei call the Ptolemaic model into question."

Aristarchus of Samos invented the sun-centered model centuries before Ptolemy, so the "so-called troll" mentioned that Ptolemy had a good scientific reason for putting the earth at the center, while the Q-Anon guys were lying liars and enemies of the truth from the beginning.

He linked to Mano Singham's The Copernican myths," which is an interesting article on the science of the early Scientific Revolution. At least I liked it. Others might, too.

Galileo was also a plagiarizing jerk who took credit for observations first made by Jesuit astronomers. It degenerated into tragedy with Italians yelling at each other. In other words, opera.

Who wants an opera about Galileo?

Israel is at the center of that Q-Anon poster. Is there any conspiracy theory which doesn't have Israel or "The Jews" at the center? Seriously.

Other than the one where Fred Trump killed JFK, that is. There must be a reason why POTUS Projection accused Ted Cruz' father of being involved.

I'm just a poor boy, nobody loves me.
He's just a poor boy from a poor family,
Spare him his life from this monstrosity.
Easy come, easy go, will you let me go?

Bismillah! No, we will not let you go.

Bismillah! We will not let you go.

Bismillah! We will not let you go.

I have the music!

Well, that certainly took off on a strange spin.