Just To Be Really Clear About Iran

Let's get this straight:  In 1953, the United States overthrew Iran's legally elected, democratic government, because we wanted their oil.  We then imposed a vicious dictator on them, who lasted in power from the 1950's until 1979.  We supplied his military, and the CIA helped form his secret service, which was responsible for the torture and murder of thousands of Iranians who opposed his dictatorship.

Then, in 1990, Iraq, under the eventually demonized Saddam Hussein, invaded Iran and started the longest land war of the twentieth century.  The role of the United States?

"The United States pursued policies in favour of Iraq by reopening diplomatic channels, lifting restrictions on the export of dual-use technology, overseeing the transfer of third-party military hardware, and providing operational intelligence on the battlefield." 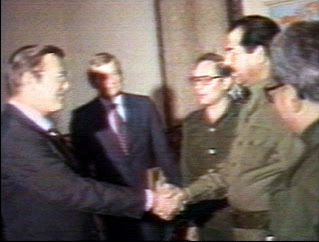 Just to sum the whole thing up, the United States spent virtually half of the twentieth century engaged in vicious, violent behavior toward Iran. Given this truth, which the American people have conveniently forgotten (the few of them who ever knew it in the first place) the fact that Obama managed to get the Iranians to put our mutual history aside, and sit down with the United States to reach an agreement of any kind is a near miracle, which a sane nation would be universally proclaiming as one of the greatest diplomatic triumphs of its entire history.

And let me be clear: the people who are filled with rage about this deal are the same ones that still cannot forget the fact that the United States had to put down their treasonous slave state a hundred and fifty years ago; yet they expect Iranians to forget their history.

The Iranians have no reason to trust us.  In fact, they have good cause to hate us.  It is a testament to Obama's real value as President, and the regard in which he is held everywhere but in the Republican fever swamp, that he managed to overcome the Iranians' memories of the past; but the United States is so caught between reason and madness these days that it seems impossible to get our people to see anything as it really is.
Posted by Green Eagle at 1:44 PM

We were warned years ago about the Corporations around the military and their numerous greed. A lot of those against this deal are wanting us to attack Iran. Greed is the primary reason and will remain so until we outlaw all lobbyist from the Hill.

A good first step, but hardly sufficient. 95% at least of all the money currently being spent on campaigns needs to be eliminated, and in all likelihood that can only be accomplished by seeing to it that it is impossible for individuals to amass the kind of money that allows them to spend hundreds of millions in legalized bribery of politicians.

Don't forget that ISIS is the fanatic love-child of the Bush/Cheney/Reagan Cabal (not just Worst POTUS but Daddy Bush and Dick's time before hand) and their murderous involvement in the region.


I must appreciate your post which is helping us in such a great manner.