September 20, 2015
I'm not in the practice of reposting graphics from Facebook featuring quotations from politicians, but this one is really too much: 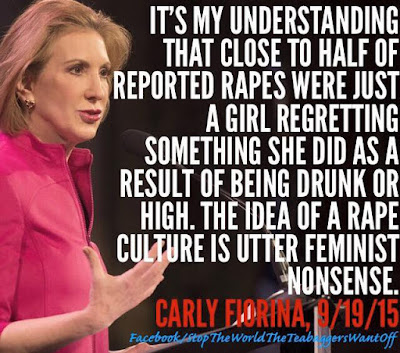 And this is the person who stood before the nation the other day and told a complete, malignant lie about Planned Parenthood- and don't even try to tell me that she was just mistaken.  Her smears have now catapulted her into second place in Republican polls.  This is supposed to be the anti-Hillary- a useless failure who made millions while destroying tens of thousands of her own company's jobs, who has never been elected to anything, and who lies without a sign that she cares about it, if it gets her what she wants.  When, gentlemen of the press, is enough enough?  Or are you going to go on providing these people with cover until the earth is an uninhabitable desert, and there is no one left to lie to?

Infidel753 said…
Or are you going to go on providing these people with cover until the earth is an uninhabitable desert, and there is no one left to lie to?

Close. They'll keep doing it as long as there is money to be made by doing so. Which won't be quite all the way up to the uninhabitable-desert point, but almost.

But thanks for making me comfortable with the possibility of Fiorina as the Republican nominee. If she makes it, this quote should be enough to destroy her in the general election, as the 47% quote was for Romney.
September 20, 2015 at 9:45 PM

Professor Chaos said…
At some point, it became a breach if journalistic etiquette to call a lie a lie. Or even to point out that what someone said is demonstrably false. Republicans have learned to use this to their advantage.
September 21, 2015 at 1:04 PM

Magpie said…
It may come to pass that "women all over this country" will "have heard very clearly" what Ms Fiorina said.
September 22, 2015 at 6:58 AM

azportsider said…
Professor Chaos: republicans just bought up all the media, so there are no journalists left who aren't their minions.
September 23, 2015 at 5:44 AM

Green Eagle said…
Yeah, it's only a breach of journalistic etiquette to call a Republican lie a lie.
September 23, 2015 at 12:04 PM

TomH said…
"Or are you going to go on providing these people with cover until the earth is an uninhabitable desert, and there is no one left to lie to?"