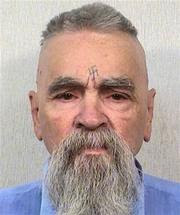 We all know about Charlie.  He's in the news every two years, when he appears for his "parole hearing."  I put the term in parentheses, because Charlie knows the only way he is getting out of prison is in a pine box.  So, he uses his appearances for the only thing he can do any more: enhance his image as The Scariest Guy In The World.  It's understandable, because it's really the only fun he can get out of life any more.  So, go for it, Charlie. 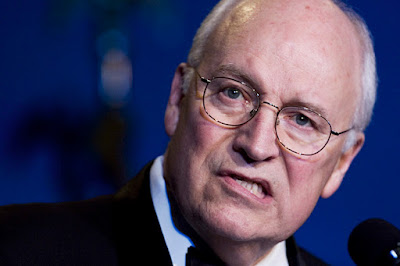 He may not be in prison, but he really has only one way of spending his time too.  He knows perfectly well that he was the main force behind the greatest military blunder since Austria invaded Serbia in 1914, precipitating World War I.  So all he can do is go around on TV and try to pin the blame on the guy who took over from him, and had to clean up his colossal mess.  And that's what he does.  Now, he has even written a book detailing his carefully crafted lies about the disaster he caused.  That's his life.  Nothing we can do about that, as long as Meet The Press and similar shows are willing to give him a platform to try to talk us into doing it again.

And let us remember that Charlie's people killed seven victims; Dick's killed a million.  And I don't know that Charlie ever personally shot anyone; Dick shot his friend in the face, when he was in a drunken stupor.

So tell me, which one of these guys belongs in prison?

Both of them belong in prison.

It's the biggest military blunder since Olaf the Hairy, High Chief of all the Vikings, accidentally ordered 80,000 battle helmets with the horns on the inside. (1-point bonus for recognizing the source.)

Jerry, I sort of disagree with you. At most, he was an accessory to these crimes; he was not present when they took place. He's now spent over 40 years in prison for that, which is a very disproportionate sentence. It's absurd to think that he poses a threat to anyone at his age He'd undoubtedly spend the rest of his life competing with Mike Huckabee and Ted Cruz on the lecture circuit. Time to let him go.

Zog, did you see this recent news story?

Calling him as accessory I think is minimizing the roll he played. He was given the death penalty for his part in the murders although, you are right, he did not personally kill them. The brutality of the murders played a role in him receiving the death penalty, I believe.

That said, I think the man is crazy and should not be among the general public. He needs to be some place where the public and himself are protected from him. That may not be where he is now, but that is not walking the streets.

A more interesting question is should he be traded for Cheney? As much as I would like to put Cheney away, Cheney has been neutered. His balls are gone. All he can do now is howl. Manson on the other hand, loose in the public, I think is still a danger because of his ability to influence and manipulate the stupid. Not even Cheney has much influence on the stupid (albeit a different stupid) anymore.

However, it is an interesting idea, trading public murderers for political murderers! Perhaps we should add business murderers to the mix. Corporations are people now. They need to be added to the list. When was the last time a business leader was convicted of murder because an employee of theirs died? Has it ever happened? The time has come!

"A more interesting question is should he be traded for Cheney?"

How about trading him for Cheney and a draft pick to be named later?

You know sad it in jest, but trades are made all the time. A trade is exactly what "granting immunity" is.

Lot of difference between those two. One wears a swastika on his balding forehead and the other wears a flagpin over his transplanted heart. But, other than that...

Hillary.Anyway I see all the left leaning blogs got the same memo