Another Mighty Display of Conservative Strength, With the Usual Result

The event, on the Capitol steps, received a lot of attention both from the usual right wing websites and the national press.  A couple of things were missing from almost every story, however.  That would include any estimates of the size of the "crowd" that showed up to see all this star power, and any pictures which clearly showed the crowd as a whole.

Well, Green Eagle searched pretty far and wide for pictures of the event.  My practice has always to play things fairly and show the photos with the largest number of people in the crowd, and here is what I found for this one: 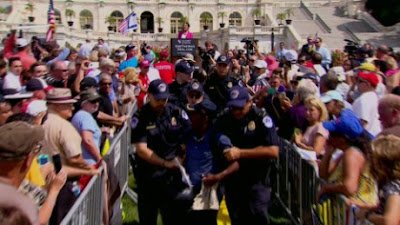 I was able to find one source that estimated the crowd at "a couple hundred."  That would seem to be a pretty fair number, given the picture above.

I must once again point out why I keep reporting on these ludicrous failures, which happen over and over again.  What they prove beyond a shadow of a doubt is that the whole "angry wingnut" phenomenon is very largely an illusion, created by right wing propaganda factories, and abetted by the mainstream press, forced as it is by their owners to pretend that there is a huge national movement dedicated to advancing the interests of the hyper-rich.  The archetype of this is the Tea Party, created by the Koch brothers after 2008 to provide a place for right wingers who were temporarily ashamed of what their Republican leaders had done to the country, to hide for a few years, and then abandoned.

The truth is that there is no real right wing movement in this country.  Oh yeah, there are millions of ignorant fools out there in "flyover country" who are mad as hell, and have allowed the Republicans to direct their mindless anger toward the wrong targets.  But in a country where hundreds of thousands turned out to protest the Iraq war, and similar numbers turned out around the country to protest police murders, things like this are worse than pathetic.  They are an insult to every decent American, or they would be if people were allowed to see how they are being conned into destroying themselves.