December 26, 2014
I saw this photo today at Hullabaloo, of an airborne banner paid for by New York police.  This sort of thing, and the accompanying demands that Mayor DeBlasio had to resign because the police were mad at him, motivated me to make a comment I've been meaning to air the last few days: 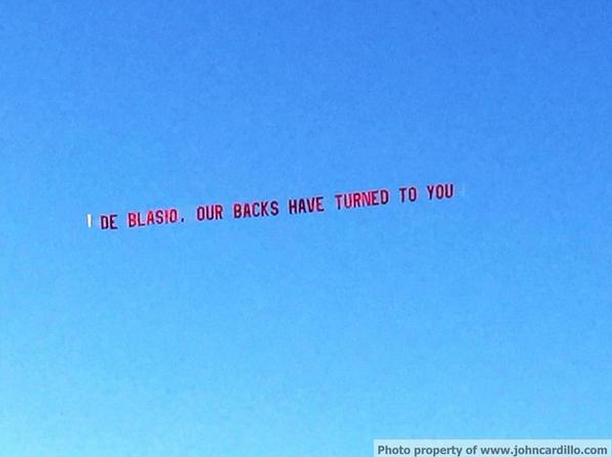 Digby mainly talks about the gross inappropriateness of city employees behaving in this manner, but it made me think of something else:  The systematic way the right has worked for years to delegitimize Obama and force him, somehow, to leave office.  With the good degree of success that this tactic has had in diminishing Obama's ability to do his job, it was perhaps inevitable that it would be expanded, and used against any left of center leader the right could find.  Well, here is a new example of it, and we can only expect many more in the future.

There are, of course, some who are so lost in their fog of right wing delusion that they actually believe that no liberal has a right to govern, no matter how much public support they may have, but we know perfectly well that 90% of this is simply a gigantic smear campaign designed by its rich financiers to get their way, when electoral winds blow against them.  It's just one more example of the pervasive Republican contempt for democracy, which seems to only be justified if it produces the results they want.

And I was thinking that they had stolen the meme from Craig Ferguson's brilliant "I'm turning my back on you, sir" skit.