It's Too Late- They're Gone

December 11, 2012
What I am about to say is utterly useless in a country so corrupt that half the population has been convinced that global warming doesn't exist, and half the politicians have been bought off by corporations to ignore the inevitable, but that never stopped Green Eagle before, so here I go:

The jobs are not coming back.

Sure, if the country would adopt a realistic trade policy, penalizing places that rely on near slave labor and which ignore the most rudimentary environmental concerns, we can bring some manufacturing jobs back from third world countries.  But due to technological advances and increased productivity, a lot of our jobs have been lost forever.

This has been obviously coming, I believe, for decades, and yet as usual, right wing opposition has prevented any sort of meaningful response.  I remember twenty or thirty years ago when people insisted that computerization would generate more jobs than it eliminated.  I never understood how anyone could believe such an irrational thing.  Why would companies go to the trouble and expense of changing the way they did things, if the result was more employees and greater costs?  Well, the truth is, there are never going to be enough full time jobs in this country any more to go around.  It is way past time that we begin to deal with this fact.

Here is what I believe must be done if we are going to cope with this situation:

First of all, rather than raising the retirement age, it must be lowered.  The insanity of forcing older people to work longer, and thereby depriving younger people of a chance at their jobs, when unemployment is so unacceptable, is hard to believe; and yet that is exactly what is being crammed down our throats every day by the Very Serious People in Washington.  The only answer to this is not to raise, but to lower the Social Security age to 60 or 62.

Second, wages must be significantly raised.  There was a time in this country when a family could live decently on the earnings of one full time worker.  That time has been gone for decades, because the rich have seized more and more of the wealth produced by our work.  Here is a graph showing this: 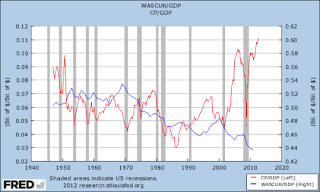 I would add, as an aside, that this phenomenon occurred once before in our country- during the 1920s- and was a significant factor in precipitating the 1929 stock market collapse.

This process must be reversed, if for no other reason than the fact that it will allow more people to exist with fewer jobs.  It will also increase the amount of money coming in to the Social Security trust fund, paying for lowering the retirement age. I suspect that there is no other way to accomplish this, other than a return of strong unions, willing to fight for workers.  It is certain that this is never going to be accomplished by waiting for rich people to suddenly develop consciences, so workers are going to have to forcibly take back their fair share of the nation's wealth.

Finally, here is a proposal I have been predicting will be necessary, for thirty years now.  The country must move toward a four day work week; and not four ten hour days, but four eight hour days.  I believe this should be achieved in stages, as follows:  First, the country will expand the number of three day weekends to one per month; then after five years, this will be further expanded to one every other week; finally in another five years, the four day work week will become standard.  It is long past time that this country move away from its deification of meaningless "productive" work that, in the end is intended to do nothing but enrich the top income bracket.  Besides generating a lot more jobs, this proposal will allow the country to turn aside from the endless struggle to merely survive that life has largely become, except for the very rich.

Unfortunately, the rich own the government now.  That is why not one single person has been made to pay for the damage Wall Street greed did to our country during the Bush administration, and why all of the Very Smart People insist that everyone else pick up the tab by having the benefits they paid for all their working lives slashed.  And that is why there seems to be no chance that things will change until savage and useless pain is inflicted on ordinary people.  Even now, it appears that Obama is preparing to fritter away his electoral victory by capitulating to sadistic Republican attacks on all of us who do not have the wherewithal to make multimillion dollar campaign contributions.

The things I proposed above would do a lot to make life more decent for the vast majority of Americans, but as that does not appear to be what our government exists for, I'm not holding my breath.

the yellow fringe said…
Good, but add this:
Raise the maximum taxable earnings amount for Social Security Taxes from the current $110,100 to several hundred thousand. Currently if you make over that amount the tax is discontinued. Keep it going to a much higher level, also raise a bit the highest amount one can draw from Social Security. This will do two things. Bring in a lot more to $ into SS, extending it's life at a time more will draw it (baby boomer bubble). It will also make some of the top earners more interested in SS as it will pay them a larger sum, maybe not equal to a good off shore bank scam they would prefer, but something large enough they will appreciate each month when they retire.
December 11, 2012 at 11:42 AM

Green Eagle said…
I would go for that. I gather that you are suggesting also raising the maximum payout for those who end up contributing more. This is an interesting idea that I have never heard before. Here's another thing: I have read that raising the minimum wage by $2.00 an hour would generate enough additional revenue for Social Security to make it essentially sound into the distant future.
December 11, 2012 at 4:37 PM

Green Eagle said…
I think it may be worse than feudalism. Feudalism was characterized by a set of responsibilities that the upper class owed to the peasants, in return for their taxes- providing protection, providing food in times of famine, etc. The oligarchs we are currently saddled with recognize no responsibility whatever to anyone. This is more like ancient despotism than feudalism.
December 11, 2012 at 8:30 PM