Now, what evidence does Ben have to support this interesting idea, that FDR, from beyond the grave, is still generating generations of thieves?  Get ready for it:

"This week, the Los Angeles Times reported a wave of theft plaguing area high schools. The objects at stake? Tubas. According to South Gate High School music teacher Ruben Gonzalez Jr., thieves broke into the band room and stole nothing but tubas."

Now, how am I going to put this?  Ben, when liberals want to make low notes, they generally resort to something more like this:

Now, here are some conservative musicians for contrast: 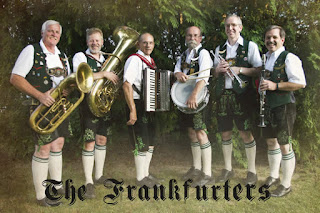 Notice which one has the tuba?    Well, Ben continues:

"Spend five minutes with many poor inner city kids and the sense of entitlement drips from them. Many of these folks are refugee thugs from "The Treasure of the Sierra Madre"

I mean, what would a right wing rant be without a little racism?

Dave Ramsey, Town Hall:  "Dave Says Be Choosey How You Give...My wife and I give the majority of our donations to Christian ministries."

Why not try taking your own advice, Dave?

Wes Vernon, Renew America:  "What would you do differently from Obama (if you wanted to bring America down)?"

How about what every Republican politician in the country is doing?  That seems to be working.  But wait, Wes isn't done with his insightful historical analysis:
"The Marxist view of the world is that if someone has more in worldly goods than you do, it means he is robbing you of what is rightfully your "fair share."

This is the opposite of the Capitalist view of the world, which is that if someone has less than you do, it means he is robbing you of your "fair share," i.e. everything.

Marsha West, Renew America:  "Hollywood unraveling the fabric of society...Liberal Hollywood is intentionally corrupting children's morals via the movies and TV programs they produce for public consumption— and it's criminal."

I guess if corporations are people, "Hollywood" is a person too.  Now, as a Hollywood person myself, let me tell you the awful truth.  We just had a production meeting this morning  for the next episode of our TV show, and all we talked about was what we could put on screen in the way of  "intentionally corrupting children's morals."  And boy, did we come up with some evil ideas!

Well, actually, I was lying.  We mainly talked about the shooting schedule and how we could keep the days out down.  In fact, that is the number one thing we always talk about.  Not that exciting, really, but then, for once, truth is a lot less strange than fiction.  Anyway, here's one more insight from Marsha:

"social experiences during adolescence when the brain is still developing can have broad consequences."

Luckily, not a concern for Conservatives, whose brains stop developing around the age of three.

Alan Caruba, Renew America:  "Obama is a horrid aberration, the result of a combination of the Democratic Party, the liberal media, and the education community to dumb down Americans and make them ready for the Communist America that Obama advocates."

Just in case you didn't know that already.   I had a personal exchange of views with Mr. Caruba once.  Let me just say that he doesn't take that well to people that disagree with him; so I'll just leave his comment to speak for itself.
World Net Daily EXCLUSIVE!  "WASHINGTON – A messianic rabbi from New Jersey is stunning audiences nationwide by revealing the striking parallels between the fall of ancient Israel and what he suggests are God's early judgments of America."

In case you didn't know, a "Messianic" Rabbi is not a Rabbi at all, but an evangelical Christian pretending to be Jewish, on the theory that crooked Christian "ministers" have missed an opportunity to bilk a whole new bunch of people who they have previously overlooked.  By the way, Green Eagle actually read the rest of this idiotic article, and believe me, the parallels between America and ancient Israel aren't really that striking.

Sure, Pam. Anything you say.  Now, back in your cage.  BACK!

Better hurry up, guys.  You only have three more weeks.

Astute Bloggers:  "THE DRONE IS A FAKE DELIBERATELY AIR-DROPPED INTO IRAN WITH BAD TECHNOLOGY IN ORDER TO THROW OFF THE CHICOMS, RUSKIES AND IRANIANS."

Talk about another planet- these guys are in another universe.  I mean really- they aren't suggesting that Obama did something right now, are they?  By the way, "Chicoms" and "Ruskies?"  Have these people been in suspended animation since Doctor Strangelove came out?
Astute Bloggers:  "ISLAMO-NAZIS GET MONEY FROM INTERNATIONAL DRUG TRAFFICKING"

Boy, if you could only work pedophile football coaches in there, you'd just about have all the bad guys on earth in one pile.

Green Eagle said…
Well, that was interesting. According to the article, LA is the tuba capitol of the world. Who said we don't have any culture here?
December 19, 2011 at 12:44 AM