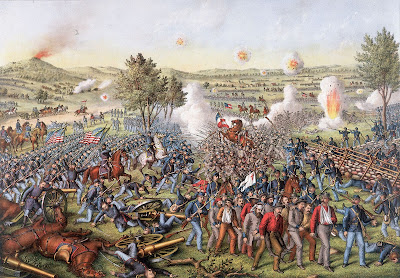 The real Civil War, just for reference
Civil War!!!   It's started now!!  For sure!!
From Vice:

"Within hours of the FBI search, however, the term “civil war” was already trending on Twitter, and hundreds of Trump supporters had already gathered outside Mar-a-Lago. Some claimed on Telegram channels that they were there to protect the former president.  The top comment on the main thread about the raid on Tuesday morning was: “Lock and load.” In the same thread, another user wrote: “It certainly feels like they’re treating it as a hot civil war."
“Time to take the gloves off,” far-right activist and GOP congressional candidate Laura Loomer wrote on her Telegram channel. “It’s been time. If you’re a freedom-loving American, you must remove the words decorum and civility from your vocabulary. This is a WAR! And it’s time to obliterate these communists.”
Marjorie Taylor Greene:  “This is the rogue behavior of communist countries, NOT the United States of America!!!,” Greene tweeted. “These are the type of things that happen in countries during civil war.”
Fox News:  "FBI bulletin warns of increasing calls for 'civil war' after raid of Mar-a-Lago"

I could go on and on with this stuff, but really, is that what we see happening?  Here are some real reports from the battlefields of the new "civil war" around the country:
Of course, there is are the loons of Arizona, carrying guns to make sure they get on the news:

And here they are: 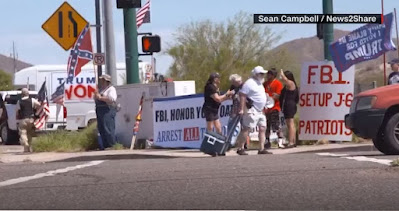 Dozens.  Dozens! in one of the most right wing cities in the country.  And here they are: 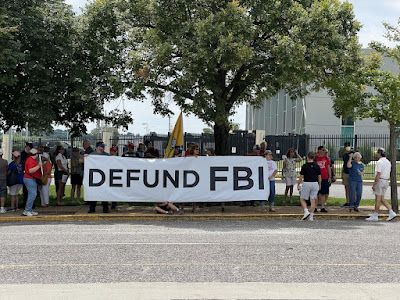 Dozens? Again with the dozens. Well, if about two dozen counts as dozens, I guess so.

COLUMBIA, S.C. - "Wednesday morning protesters were seen outside the Columbia FBI building in response to a search at former President Donald Trump’s estate." 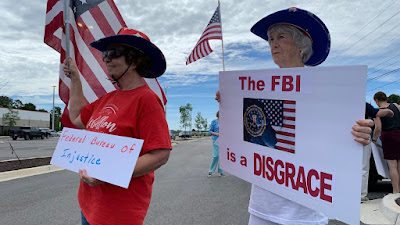 I counted seven of them.

This one in Riverside, California, and here they are: 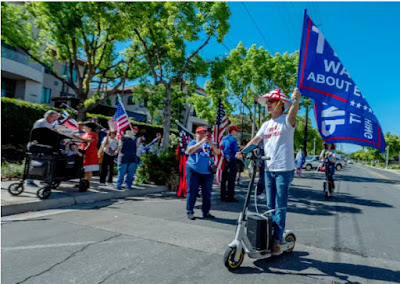 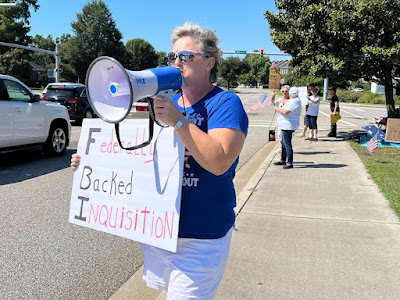 Apparently, not even ten of them.

Insider:  "Trump supporters protest the execution of a search warrant against the former president outside Mar-a-Lago and FBI headquarters" 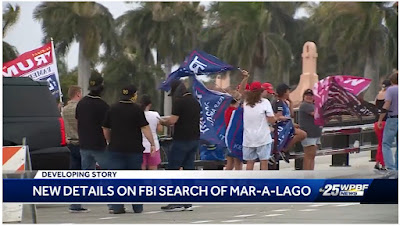 The pathetic orange toad doesn't seem to be able to get more than a couple of dozen protesters outside of his own mob hangout.  And as for the FBI, here is a nice picture of the FBI building: 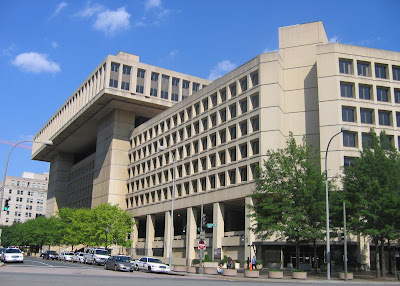 I've had to resort to this because:

"Pro-Trump FBI protest cancelled after not one demonstrator showed up"

So there you go, maybe 100-150 all told, all around the United States, but enough to justify tons of breathless national media coverage about the coming Civil War.
Meanwhile, marches of hundreds of thousands protesting our current corrupt Supreme Court, or any other sort of left wing activity, get completely ignored.
If a Civil War is coming, it is going to be the most pathetic one in world history.  These people are too fat, stupid, lazy and drug addled to get anything together, even when they have a chance.  They will be mowed down, but not like blades of grass, because there won't be enough of them to make a tiny patch of lawn.  They only exist because our miserable excuse for a mainstream press won't stop kissing Trump's ass.

They only exist because our miserable excuse for a mainstream press won't stop kissing Trump's ass.

Infidel753 said…
Thank you for pointing this out. The wingnutosphere is alive with breathless predictions of an imminent outbreak of civil war or revolution, but the public airing of that kind of fantasy has been pervasive in those circles since The Turner Diaries was published, if not longer. The nearest they've got to an actual war so far is one dingbat with a nail gun and that one guy who set fire to his own car and then shot himself. Hardly civil war material. If they can't even get more than a couple dozen people to turn out and hold signs in cities with millions of people, it's a safe bet that the 82nd Chairborne Camofattards are just going to continue posting fake-menacing rhetoric on the internet -- and nothing more.
August 16, 2022 at 7:35 PM

Mostly.A.Cynic said…
there was supposed to be an armed protest at the county courthouse where I live, in a pro-Trump county the media showed but no protestors though. As your pics show the media is being hyperbolic about the crowd size of these "protestors". Seems like if you have a MAGA hat on and you're armed the media just has to talk to you. You just don't see the media talking to everyday Democrats about Trump's legal issues and the corruption that revolves around Trump
August 21, 2022 at 10:44 AM

Green Eagle said…
Cynic, may I say that this is not a new phenomenon. I remember first noticing this when covering the shameful tantrum that Republicans threw over the life of Terry Schiavo. The "demonstrations" demanding that this brain-dead woman be kept on life support received massive publicity, week after week, month after month. I noticed that when I looked at photos of these demonstrations, they appeared to be very small- a couple of busloads at best, well within the power of right wing groups to generate using their massive financing. This was in the early days of my blog, and I set myself the task of looking at every single photo of these demonstrations that I could find, in the end examining over a hundred of them. In no case was I ever able to see more than fifty or sixty people at any demonstration, and yet our miserable mainstream press collaborated with the right by portraying this as a gigantic movement. At the same time, huge demonstrations for liberal causes, often attracting over a hundred thousand protesters, were routinely ignored by the press. This phenomenon, by the way, is a major reason that our country was saddled with a corrupt, treasonous degenerate as President for four years, and still can't rid ourselves of his presence.
August 21, 2022 at 12:42 PM

Mostly.A.Cynic said…
The Schiavo issue yep I do remember that, that issue blew up somewhat in W's face surprised me somewhat because of as you pointed out MSM coverage. There was a hell of a lot of opposition to the GOP's meddling in the Terry Schiavo situation but the MSM ignored almost all the opposition. We've had this kind one sided coverage through the years the MSM following the Sarah Palin/Tea Party falling over themselves to get a soundbite is another sample, a small example as there is many many more
August 22, 2022 at 8:33 AM