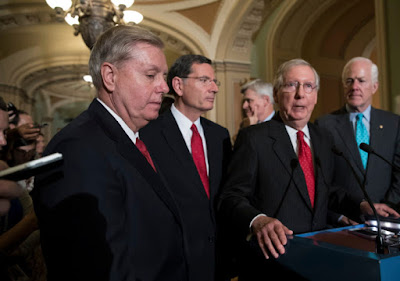 The Republicans, I mean.  They learned that pursuing a platform of hatred, racism and violence resulted in losing the House, the Senate, and the White House.

But let me go back in time to another lesson the Republicans learned, the one brought to them by Richard M. Nixon.  Not the lesson that crime doesn't pay.  Of course that never occurred to them.  No, what they learned was that racism is a mighty good substitute for integrity, and by the way, they learned never to let there ever be a single Republican Senator who would vote against the will of the party, no matter what the circumstances.

Anyway, here we are at lesson time again, and once again, Republicans have learned their lesson well.  Not that a lying, bullying, criminal who lives in a world of psychotic delusions does not make a very good President.  No, what they learned was that, if cheating doesn't work, the answer is more cheating.  That's it.  It never occurred to them that it might be a good idea to do something for once that benefited the American people- no, of course that never came to their minds.  Just amp up the lying, and amp up the vote rigging by a magnitude or two, and misuse the Congressional power that they still have, and they will be just fine in 2022 and 2024.

After the defeat of the worst monster to ever occupy the White House, I sure thought we were in for a break from the endless onslaught of terror that Republicans gave us, but no- if anything it turns out that defeated Republicans are even worse than winning ones; more feral and more barbaric than ever in their lust for power.

Digby, quoting Paul Waldman, has this to say:

"Paul Waldman suggests lack of legislation to protect voting rights can be offset by massive organization. And expenditures in the billions for on-the-ground organizing:

"This is exactly what Democrats need to do — and what in the past they’ve so often failed to do. Every four years, they seem to rediscover the importance of organizing, putting together new, often well-funded organizations meant to register voters and get them to the polls — then the effort fades away after the election, and they have to start all over again..."

Democrats have new tools and allied organizations prepositioned to aid them that did not exist a few years ago. Waldman notes that Democrats spent $7 billion on the 2020 election, so the money is out there. But long-term planning is not their focus. Or their funders’ focus. Getting donors to put their money behind the kind of longer-term, off-year organizing efforts Stacey Abrams used to great effect in Georgia is not in their nature. The right thinks long term. Lefties want quick fixes and candidates to fall in love with."

Is that really the answer?  We just about killed ourselves barely defeating a pack of wild hyenas that should be ashamed to call themselves Americans, so what we need in the future is to raise more money and expend more effort than the almost superhuman struggle that held at bay the vast cesspool of wealth that Republicans have spent 40 years funneling into the pockets of their real base, the richest thousand families in the country?  And if we win in 2022, have to come up with even more to counter the endless resources of the Kochs, the Mercers, the Waltons and their hateful peers?  And then more and more, as time goes on?  Al the while knowing that, if we lose just once, our democracy is gone, replaced by a pitiless dictatorship?

This cannot be the answer to our problems.  The only answer possible is to crush the now openly Fascist Republican party out of existence, and that can only happen by stripping the richest families in this country of their wealth through a massive redistribution of that wealth downward.  Tax increases on the rich are a great idea, but only a start.  We must see a universal basic income to meet a future in which there are never going to be enough jobs, and we must stop coddling governments in other countries who provide the dark corners where totalitarianism can still grow.  Government for the people- it is the only answer, and even this will require a nearly perfect battle against the mountains of wealth that the Republican party has stacked up against us.

Vasiliy said…
I second that emotion: TAX THEM INTO OBLIVION! The churches and all their evil spawn along with them.

Anonymous said…
Without being able to push the agenda through the senate there will be no major changed to the taxes and none of the redistribution you advocate. Until the Democrats have a operational majority, minus DINOs, the only path forward is another massive ground game.

Yes, the vast majority of Americans would like to see the rich pay more taxes. But the GOP leadership, knowing where the bread gets buttered, doesn't.

The GOP will be cooperative as far as lip service and they will slow-walk some minor legislation but nothing is going to come of it.

As is the norm. Democrats will have to do the heavy lifting getting a functional majority before we can start on taxes.
June 15, 2021 at 2:22 AM

Green Eagle said…
Anonymous, sad to say, I can't argue with what you are saying. Only someone who has been in a coma the last decade or so could argue with it. I'm pretty much down to counting on Covid to get us enough of a majority that we can get something done. It would be one of the great ironies of history if the failure of their demigod in dealing with the pandemic doomed them to extinction.
June 15, 2021 at 10:56 AM