US Embassy Attacked- Shut up about Benghazi!

December 31, 2019
So here's an item that, I suspect, will be pushed out of the news as fast as possible.  From the Washington Post: 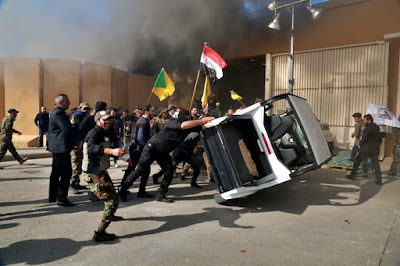 No, this is not Benghazi under Obama, it is Baghdad under Trump.

And this further information is, I think, hardly comforting:

"Supporters of an Iranian-backed militia besieged the U.S. Embassy in Baghdad on Tuesday in retaliation for U.S. airstrikes, breaking through the first layer of security at the embassy compound and damaging a reception area before being expelled by Iraqi security forces."


Yes, the mighty United States military, so strong under Trump's wise leadership, was impotent to repel this attack on our own embassy, and had to rely on Iraqi troops to do it.

I have to say that if the Democrats in the House do not start multiple hearings about this event, and keep them up for every single day from now until the election, they are utter fools.  Not that I expect them to do the right thing, even when it is this obvious.

Grung_e_Gene said…
Trump's Absolute dereliction fo duty throughout his tenure, military deaths in accidents sky high, Niger Ambush never fully investigated, decision to drop a MOAB for show... but, disgusting slob Trump mouths words about the best military ever and the Media and country play along and agree these things aren't happening.
December 31, 2019 at 7:40 PM

Unknown said…
Marriage restoration..Stop your marriage from breaking apart today. I lost my husband to another woman 2 weeks ago after 27 years of marriage . We had a lovely marriage but he started a relationship with a co worker who chased after him . He is living away near his work and her and refuses to talk to me or to come home . I am devastated and am finding it hard to cope . I wish I did not love him and that I could move on but I can't . I don't know how to stop feeling like this I wish I didn't as its eating me away and I m starting to feel ill. I have degraded myself begging him to come home all to no avail. I became very worried and needed help. As I was browsing through the internet one day, I came across a website that suggested that Chief Dr Lucky can help solve marital problems, restore broken relationships and so on. So, I felt I should give him a try. I contacted him and he did a spell for me. two days later, my husband came to me and apologized for the wrongs he did and promise never to do it again. Ever since then, everything has returned back to normal. I and my family are living together happily again.. All thanks to Chief Dr Lucky. If you need a spell caster that can cast a spell that truly works, I suggest you contact him. He will not disappoint you. if you have any problem contact him, I give you 100% guarantee that he will help you, This is his details,Email him at: Chiefdrlucky@gmail.com you can also call him or add him on Whats-app: +2348132777335
May 3, 2020 at 12:54 AM