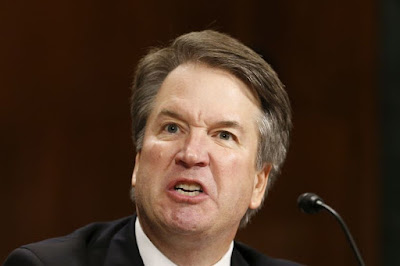 Boy, wouldn't you love to come up in front of this judge.


If anyone has any doubt what the Senate Republicans have in store for the trial of the patently guilty Donald Trump, they only have to look at the way that those same Republicans handled the investigation into the appointment of the grotesquely unfit Brett Kavanaugh to serve on the Supreme Court.


Tens of thousands of pages of information about Kavanaugh's history that the White House refused to turn over, with the collaboration of Senate Republicans.

Multiple vital witnesses to the accusations which were never even talked to, let alone allowed to testify, at the behest of the White House.

Vicious, lying attacks on the limited witnesses that were allowed to testify, both from the White House and Senate Republicans.

Massive synthetic outrage from Senate Republicans, designed to obscure the facts in a maelstrom of anger and distortion.

And finally, a party-line vote to place this disgusting creature on the Supreme Court, with Republicans totally ignoring his unbelievable performance on national TV showing his clear unsuitability to be any sort of judge.


Well, get ready, because we are about to see an unashamed repeat of this disgraceful dereliction of duty in the upcoming Senate trial.

joseph said…
The real problem with Kavanaugh is his finances. I would hope the next Democratic president will appoint an attorney general who would look into that.
December 17, 2019 at 11:32 AM

Green Eagle said…
I have said before that the next Democratic President (let it be in 2021, I pray) should immediately release the tens of thousands of pages of documentation of his history that the Trump White House withheld.

Along, of course, with every scrap of information withheld about Trump's open treason.
December 17, 2019 at 2:10 PM

Unknown said…
Marriage restoration..Stop your marriage from breaking apart today. I lost my husband to another woman 2 weeks ago after 27 years of marriage . We had a lovely marriage but he started a relationship with a co worker who chased after him . He is living away near his work and her and refuses to talk to me or to come home . I am devastated and am finding it hard to cope . I wish I did not love him and that I could move on but I can't . I don't know how to stop feeling like this I wish I didn't as its eating me away and I m starting to feel ill. I have degraded myself begging him to come home all to no avail. I became very worried and needed help. As I was browsing through the internet one day, I came across a website that suggested that Chief Dr Lucky can help solve marital problems, restore broken relationships and so on. So, I felt I should give him a try. I contacted him and he did a spell for me. two days later, my husband came to me and apologized for the wrongs he did and promise never to do it again. Ever since then, everything has returned back to normal. I and my family are living together happily again.. All thanks to Chief Dr Lucky. If you need a spell caster that can cast a spell that truly works, I suggest you contact him. He will not disappoint you. if you have any problem contact him, I give you 100% guarantee that he will help you, This is his details,Email him at: Chiefdrlucky@gmail.com you can also call him or add him on Whats-app: +2348132777335
May 3, 2020 at 12:56 AM