December 04, 2019
There have, as we all know, been four impeachment attempts directed at American Presidents.  As the impeachment of Donald Trump draws near, I hear more and more narratives that imply that, as with Trump, these impeachments revolved around Presidential corruption.  That false narrative is one more specimen of Republican spin intended to excuse the behavior of one of their own, but like all Republican spin, it is being happily gobbled up by a large part of the mainstream press.  I would, therefore, like to briefly consider the three previous impeachments and what they were really about. 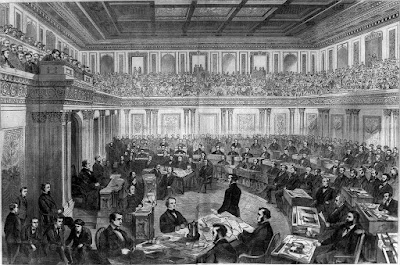 There were no accusations of corruption surrounding Johnson.  Here is what he did after becoming President when Lincoln was assassinated, which resulted in his impeachment:  I do not want to get too long winded here, but Johnson conspired with unrepentant former Southern slave owners to pass legislation that would effectively have reintroduced slavery.  After the years of war and the hundreds of thousands of dead Americans who fought to preserve the union and end slavery, enough members of Congress would not tolerate throwing away the gains and voted to impeach Johnson; although a largely party line vote in the Senate prevented the two thirds majority that would have removed him from office.  In any event, it put and end to his schemes, and history moved on.  I repeat, as hateful as his scheming was, it was not corruption. 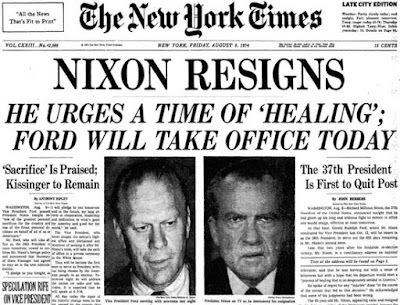 Nixon did certainly commit crimes, and they certainly were impeachable.  When faced with the inevitable, he resigned.  Nevertheless, there was never any claim that he had used the Presidency to enrich himself and his family, or to align himself with hostile foreign governments, against the security interests of the American people, two forms of treachery which are virtually daily occurrences with Trump.

Some years later, when I lived in Europe, I had European friends ask me how Nixon could have been removed over what seemed to them to be relatively minor misdeeds.  Here was my explanation:  Throughout Nixon's career, there had always been two competing narratives about him:  Nixon the brilliant politician and statesman, master of realpolitik, and Nixon, to be blunt, the crook.  Enough people were induced to accept the first narrative, to elect him twice.  But the details of his behavior in the Watergate scandal were simply inconsistent with this tale, leaving the crook narrative the only one that could account for his behavior; and thus his legitimacy in the eyes of the American people evaporated.  I must note that the Republican party learned a huge lesson from Nixon:  today's Republican base has been so thoroughly propagandized that no revelation of Trump's debased character can get through to them. 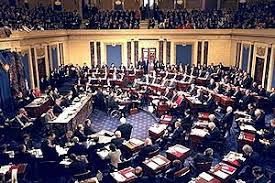 Let's just get to the point here:  However we may disapprove of Clinton having gotten a little sex with an adult intern, it was hardly just grounds for impeachment.  The Republican impeachment of Clinton certainly did involve corruption, but the corruption was theirs, not his.  It was, in fact, the worst partisan abuse of Congressional power in the history of the country, carried out through a mixture of revenge for Nixon's removal, and the now open belief that nobody but Republicans has a right to be President or to run Congress, regardless of the views of the American people, and regardless of what it takes to prevent Democrats from participating in the government.

I'm not going to go over a history which we all know too well.  I will just say that Trump has committed literally hundreds of impeachable acts, on a virtually daily basis, in the three years that he has been President.  These range from "minor" acts like his 14,000 lies, through endless self dealing, obstruction and perversion of justice, appointing people to positions for the sole purpose of frustrating established law (a Constitutional violation itself,) witness intimidation, ignoring established law, and all the way up to clearly treasonous behavior, as he has over and over again favored the interests of a foreign dictator over the security of the country.  This is a record of criminality that dwarfs the combined misdeeds of every other President in our history.  It is laughable that Republicans can ignore all of this, but they have set themselves on a course to do exactly that.


In summation, we have one President, Richard Nixon, who was forced to resign due to a series of actions that could be regarded as rising to the level of corruption, one who was impeached over a very legitimate issue of his misuse of power, and one who was impeached in an act of Republican partisan revenge.  There is no precedent for the malignant behavior of Trump, and the notion that his conduct does not justify removal is in itself a blow directed at the mechanisms of democracy.

Bob Broughton said…
Reagan should have been impeached for Iran-Contra.
December 7, 2019 at 7:54 AM

Ed said…
Clinton was impeached for lying under oath. Of course, you knew that.
https://www.vinsuprynowicz.com/wp-content/uploads/2018/08/Dg44pomXUAAUNRj.jpg
December 7, 2019 at 8:19 AM

Green Eagle said…
Ed, the Republicans began trying to impeach Clinton for the nonexistent crimes committed during the manufactured Whitewater "scandal." When that didn't pan out, they spent about $75 million dollars investigating "travelgate," the "Christmas card scandal," the death of Vince Foster and a score of other Republican lies and smears. When all of that turned up nothing, they fired the initial special prosecutor and replaced him with Ken Starr, who was a right wing hatchet man committed to finding an excuse to impeach Clinton. If the Monica Lewinski matter hadn't done the trick, they would have impeached him for jaywalking or putting his feet on the desk or anything else they could find. The impeachment momentum began years before Clinton allegedly lied about having sex with Monica, and had nothing to do with that fabricated crime. It was the greatest abuse of Congressional power in the history of the country; the fact that there were no consequences for the crooked Republicans resulted in the Swift Boat scandal, the Benghazi lies and the phony Hillary email nonsense, which resulted in the Presidency being stolen twice in this century. I will not stand idly by and tolerate your Republican lies about it.
December 7, 2019 at 1:52 PM

Anonymous said…
I was in traffic, heading to work (active duty Navy) just after Clinton won his first election to President. He hadn't been sworn in yet, mind you. Bumper sticker on the truck in front of me?
IMPEACH CLINTON. He wasn't even President yet, they were already printing bumper stickers to impeach him.
December 7, 2019 at 6:33 PM

Unknown said…
Marriage restoration..Stop your marriage from breaking apart today. I lost my husband to another woman 2 weeks ago after 27 years of marriage . We had a lovely marriage but he started a relationship with a co worker who chased after him . He is living away near his work and her and refuses to talk to me or to come home . I am devastated and am finding it hard to cope . I wish I did not love him and that I could move on but I can't . I don't know how to stop feeling like this I wish I didn't as its eating me away and I m starting to feel ill. I have degraded myself begging him to come home all to no avail. I became very worried and needed help. As I was browsing through the internet one day, I came across a website that suggested that Chief Dr Lucky can help solve marital problems, restore broken relationships and so on. So, I felt I should give him a try. I contacted him and he did a spell for me. two days later, my husband came to me and apologized for the wrongs he did and promise never to do it again. Ever since then, everything has returned back to normal. I and my family are living together happily again.. All thanks to Chief Dr Lucky. If you need a spell caster that can cast a spell that truly works, I suggest you contact him. He will not disappoint you. if you have any problem contact him, I give you 100% guarantee that he will help you, This is his details,Email him at: Chiefdrlucky@gmail.com you can also call him or add him on Whats-app: +2348132777335
May 3, 2020 at 12:56 AM