So Gordon Sondland, Trump's only defender that we know of in the impeachment hearings, suddenly changed his story today, and instead of denying that there was a quid pro quo demanded of Ukraine, admitted that there was.  Enough, finally, for Republicans to admit that maybe something was wrong with Trump's behavior? Of course not; they just have to amp up the lying:

I have gone back to writing Wingnut Wrapups because the level of right wing deceit that is going to be necessary to counter the truth, which is beginning to spill out like water over Niagara Falls, is staggering.  Yet tens of millions are going to at least claim they believe this malignant nonsense; this is going to form the foundation of Trump's campaign to be elected, and we had better be ready for it.

This is like "Project Veritas Confronts George Washington on His Personal Vendetta to Capture Benedict Arnold."  It is not a "vendetta" when the guy you are trying to stop is a traitor, it's an act of patriotism.


Scott Morefield, Town Hall:  "It’s Time For Republicans To STOP Whining About The ‘Process’ And Defend This President"

Good luck with that, buddy.  They don't have a defense, seeing as how he confessed on TV to the crime.

This is presented as something horrible.  To me, it's pretty much like complaining that drug laws are unfair because they take jobs away from Heroin dealers.

Yeah, everyone there who gives a damn about our country.

Where, on Mars?  Come on, how pathetic can you get, defending this man?  We all know that he might have collected millions for this crystal church, but that he would have just kept the money, as he always did with his "charities."

It always amuses me how wingnuts imagine that every piggish thing they do causes liberals endless pain.  I have never heard one word about this story from sources that could be considered liberal, but I have now seen it multiple times on right wing websites.

To Republicans, every decent instinct is a mental illness.

Because we always turn for advice on constitutional law to a crooked TV evangelist.

How dare they?  Oh, maybe this has something to do with it:


"A state-level analysis has found that religion is correlated to searches for online pornography in the USA.

Communists- there they go, telling the truth again.

Ever leftist John Roberts.  That's pretty much where I tuned out on this garbage, although I will note that Larry's article seems to be motivated by Federal judges having thrown out two of his endlessly bogus lawsuits in one day.


World Net Daily:  "Taliban kicked Jews out of prison for arguing too much"

Finally, a World Net Daily story that I can believe.

Coming up.  By Ted Noel, whoever the hell he is.  Because of course it is; Republican smears never die.  Ted apparently wrote a number of times during the 2016 campaign that Hillary had Parkinson's disease.  Now, four years later, and absent a shred of evidence that she does, and with her being a private citizen and all now, he feels it necessary to try to spread this lie again.


Daniel John Sobieski, American Thinker:  "Why Is Vindman a War Hero but Flynn a Traitor?"

Oh I don't know, maybe because Flynn is a convicted felon, having confessed to lying to the FBI about his contacts with the Russians, while Vindmann told the truth. That's my guess.  Got a different explanation, Daniel?  Oh yeah, deep state something something.


Thomas Lifson, American Thinker:  "Pelosi in 1998: Impeachment has a ‘traumatic impact on the confidence that the American people have in government’

That may be true, Thomas, but it doesn't change the fact that Trump is a traitor.  Nice try though.

I did! And here are a couple of views from the rally: 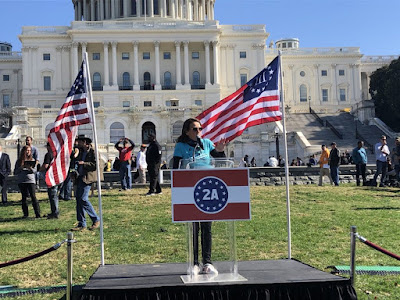 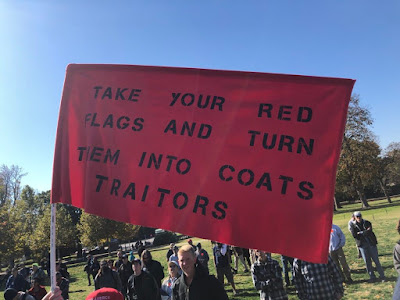 That'll put the fear into those gun grabbers!  Seriously, if I can be serious for a moment, it is this sort of thing that leads me to believe that when the great Civil War Part Two comes along, virtually none of these freedom blabbers will show up.  Okay, back to the comedy.


Breitbart:  "How To Entirely Empty Your Bowels Every Morning"

Please, I don't want to know. Not if it actually involves reading this article.  P.S.- this is the title of a real article at Breitbart today, I swear to God.

Yeah, but in what fantasy world did the law require Trump to extort the Ukranian president into telling lies for him?


Beth Baumann, Town Hall:  "Trump Vows to Withhold Federal Aid For California Wildfires Until Gov. Newsom Gets His Act Together"

I.e. toes the Republican line.  This is another grotesque example of extortion, just like what happened in Ukraine.  This bastard can't stop committing crimes for one week.


Nick Arama, Red State:  "Trump Tidbit: There May Be More Coming on Vindman"

Of course there will be.  As soon as the Republicans manufacture it.

Unless you believe in Federal law.  Which Republicans obviously don't.

No, if you reveal anything bad about a Republican, you are not a whistleblower, you are a Communist traitor.  Or at least that seems to be Elizabeth's argument.


"his safety is his own concern. He should have thought about that before he decided to play with fire."

"Play with fire, i.e. tell the truth in a Congressional hearing.  Now if he is killed by a right wing terrorist, it's his own fucking fault.  I swear to God, that is what this woman says.  It's like a mob movie from the 1930's.

Because who could be better to assess Trump than a guy who gets punched in the head for a living?


Nick Arama, Red State:  "Warren’s ‘Plan’ for What People in Private Insurance Will Do After She Kills Their Jobs Is Incredibly Bad"

What, get jobs in the massively revitalized coal industry that Trump promised us?

Because that would be illegal, you dumbass.  Not that you or any other Republican toady cares.  Of course, that didn't stop you from revealing the purported name a couple of posts later.

Referring to Trump.  I'd like someone to explain when Trump was ever a nice guy, but apparently according to Jim, Trump hasn't come anywhere close yet to the not niceness he is capable of.  Jim is probably right there, as we are soon to find out.

HUGE!  The Steele dossier was not a classified document, but apparently it is now an abomination for anyone to pass around anything which reveals Republican corruption.

That is to say, all of it.  Schiff did in fact release the statement of Gordon Sondland, which as noted above, seemed to agree with Trump's claims, but that has gone under the wheels of the bus today, so I stand by my statement:  All of the evidence incriminates Trump.  Believe me, if there was any evidence that didn't, the Republicans would have leaked it in a microsecond.


Jim Hoft, Gateway Pundit:  "Former US Attorney General: Whistleblower Is Not Guaranteed Anonymity, He Does Need to Publicly Testify and Be Open to Cross Examination"

That would be "former US attorney general," convicted felon and master Trump bootlicker, Matt Whittaker.  Only the best people in the Trump administration, yes sir!  P.s.- Jim, when you never were the Attorney General, you can't be a former Attorney General.  Think about it.

Pissed.  They're PISSED, I tell you.  At least they weren't pissed on, like Donald Trump in that Moscow hotel.

Finally!  It's been almost three weeks!  Say, how many years has it been since Trump promised to release his taxes?

Anything to turn impeachment into a circus.


Eric A. Blair, Gateway Pundit:  "Up To One Million ‘Cannibal Ants’ Trapped In Soviet Nuclear Bunker Have Escaped"

Just in case you don't have enough to worry about.  Back soon with more, don't you worry.

It always amuses me how wingnuts imagine that every piggish thing they do causes liberals endless pain.

Well, causing liberals pain seems to be their only source of happiness in life, considering how much that rant about "owning the libs". Apparently they fantasize about it a lot too.

"Cannibal ants" would mean ants who eat other ants, right? I don't see why we should be concerned.

Ants. One MILLION ants. With laser beams on their heads! Forget about impeachment, we need a tax cut for the rich to stimulate the economy so we can spend more on advanced weapons to fight the ants.

It's no good. Trump will let the ants devour anything they want, if they can get him some dirt on Biden.

Well, of course. The point of the whole thing will be to spend all the money on the weapons. It's better if they don't get used, because then he can use the threat of the (probably Muslim) ants to motivate his base.