See, that's what is important.  They booed him- that means nothing.  That they stopped, well...


"But, as you can see and hear, when the jumbotron revealed who Trump's guests were, the crowd quieted. The president invited five wounded veterans to sit with him in his suite."

So he used wounded veterans as human shields, which proves what a great patriot he is.


"Booing the president of the United States the same day he announces we’ve killed the leader of ISIS is completely un-American and childish."

Booing him in the same century is un-American to them, because they want a dictatorship, and he is willing to be the dictator.


"I’d wear getting booed in the swamp as a badge of honor. If you’re pissing them off you’re doing something right!"

The swamp...anywhere other than his rallies with packs of ignorant racist haters.

And now, time for a little Conservative "humor" 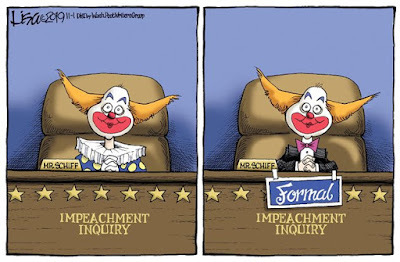 Keep telling yourself that Schiff is a clown, guys.  You are about to reach the end of that smear pretty soon.

Because of course he is. By the way, what is it with people named Brandon today?

Because of course, if someone is against Trump, they have no right to ask why he violated the law.

Of course, it is not a disgrace for the President of the United States to spend years actually leading chants of 'lock her up' directed at Hillary Clinton who, unlike Trump, is not a criminal traitor.


Roger L. Simon, PJ Media:  "After Baghdadi Action, Dem Candidates Have Their Work Cut Out for Them."

Not if they are running in an electorate of Washington Nationals fans.

Because of course they do.  Uh, by the way, guys, that should be "to STEAL the oil."


Jim Hoft, Gateway Pundit:  "President Trump: Adam Schiff Went Before Congress and Made Up My Words… It’s a Fraud… That’s a Criminal Act. What He Did is a Criminal Act "

What?  Another lie about Adam Schiff from Trump?  I can hardly believe it.

51%.  Before the public hearings have even started.  In a massively Republican State. Boy, that must be a lot of comfort to Trump.

And how about a little more Conservative humor? 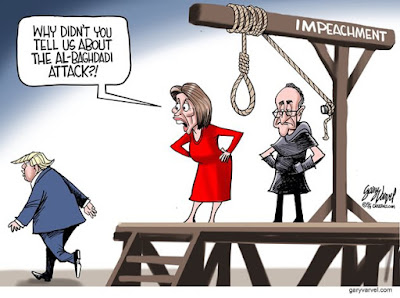 Right, because having committed an endless series of criminal acts gives Trump the right to commit another one.

Ahh, gender equality.  Remember when it was only girls who had their testimony ignored because of what they were wearing?

Because what could be more shifty than holding hearings in public?

Timothy, I know this probably never occurred to you, but the Russians are the ones we are trying to keep our secrets from.  Once they have them, they don't need to leak them.  By the way, just to be clear, the claim about Democratic leaders leaking things is a total lie, told like so many Republican lies, to distract from the endless leaking of their own administration.

That's nice.  It wasn't enough that Comey destroyed himself helping to elect Trump.  He wouldn't debase himself further, after Trump thanked him by lying about him, firing him and trying to humiliate him in public.  No, three years later, they are still smearing him.


Brandon Morse, Red State:  "Look Out! Deadspin Writer Is Subtly Threatening Media Figures Who Aren’t On Board with Her Revolt"

Deadspin.  A sports site.  Brandon had nothing to say about the President of the United States openly threatening media figures who aren't "on board" with his criminal Presidency.

That would be "Tried and failed to correct rough draft," asshole.  And by the way, with Donald Trump as your leader, I'd be careful about calling anyone a pompous nutjob.

I presume Pat "I never met a Hitler I didn't like" Buchanan was not talking about August 9, 1974. 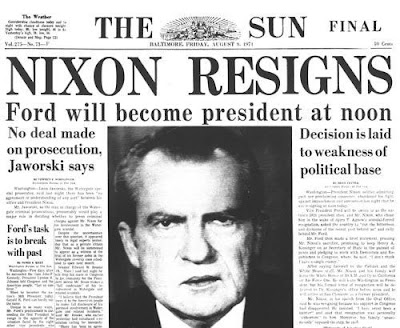 No, that was the day the establishment routed Nixon.


Stu Cvrk, Red State:  "The First Four-Star Flag Officer In US History Joins The Effort To Void The Election Of The US President...It’s time an example is made of retired FOGOs who violate their continuing oaths and disparage the President. Admiral McRaven should be recalled to active duty and then charged under Articles 88 and 134 of the Uniform Code of Military Justice."

These provisions concern active duty military only, which McRaven is not.  To engineer a punishment of him for violating them would constitute a clear step toward Stalinism.  By the way, article 134 forbids statements "disloyal to the United States," not "disloyal to Donald Trump."  I am sure that change in the wording is coming soon if we do nothing.


Streiff, Red State:  "Whistleblower’s Attorneys Make a Desperate and Pathetic Attempt to Silence the Free Press and a Free People"

Or, in actual English, "Whistleblower’s Attorneys Make a Desperate and Pathetic Attempt to force the treacherous traitors at places like Red State to follow the law and not reveal his name."


Joe Hoft, Gateway Pundit:  "This Is A Seditious Coup – Last Time Democrats Did This They Eventually Hanged for Their Sedition"

This article is illustrated with the following photo: 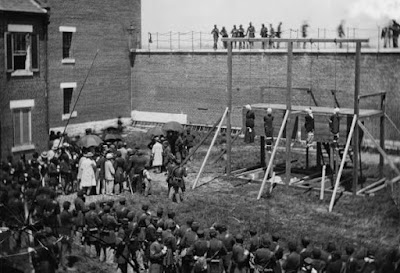 This is a picture of the execution of the conspirators in the assassination of Abraham Lincoln.  Interesting that Republicans have now changed these defenders of their beloved Confederacy into Democrats.  There is no end of the lies.

There is, however, an end to this batch of garbage, and this is it.  Bye.