October 02, 2019
As some sort of reckoning for the abominable abuses of the Trump administration seems to be taking form, I believe it is vitally important to consider whether Trump's criminality could be considered to rise to the level of treason.

Of course, Republicans already have their propagandists out in force, angrily denying that such a thing could even be considered.  This denial is based almost entirely on the assertion that treason can only be committed if there is a declared state of war between the United States and the country on behalf of which the accused has acted.  I would like to consider this claim, which I believe to be a self-serving lie like everything Republicans have to say.  I must state that I am not an attorney, but I believe the evidence is clear enough to be understood by ordinary people.

First, let us look at what the Constitution actually says:

"Treason against the United States, shall consist only in levying war against them, or in adhering to their enemies, giving them aid and comfort"


Please note the use of "or" in that sentence.  This makes it clear that one could adhere to our enemies without "levying war."  Thus, the plain words of the Constitution do not support the Republican claim.

Republicans argue, however, that Federal court decisions have established that a state of war is required for an act of treason to take place.  I have undertaken what I believe to be a fairly thorough search for these alleged court decisions, and have found only two that are cited or that seem to apply to this question; that in the case of the treason trial of Aaron Burr in 1807, and the previous case of Ex Parte Bollman and Ex Parte Swartwout, 8 U.S. 4,which was cited by Justice John Marshall in his decision on the Burr case.  Neither of these, I believe, supports the Republican claim. 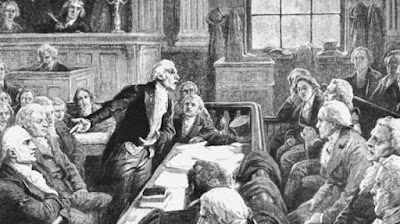 
Bollman and Swartwout were two men who attempted, but failed, to assemble a militia to attack the Federal government.  Here is the pertinent part of the decision in that case:

"To constitute a levying of war, there must be an assemblage of persons for the purpose of effecting by force a treasonable purpose. Enlistments of men to serve against government is not sufficient. “It is not the intention of the court to say that no individual can be guilty of this crime who has not appeared in arms against his country. On the contrary, if war be actually levied, that is, if a body of men be actually assembled for the purpose of effecting by force a treasonable object, all those who perform any part, however minute, or however remote from the scene of action, and who are actually leagued in the general conspiracy, are to be considered as traitors.”


As you can see, the case was not about whether treason could be committed absent a declaration of war, but totally regarding what constituted treason in a case where war was actually levied.  So this case really has nothing to say about the Republican claim.  However, let me note that it does say that those "who perform any part, however minute, or however remote from the scene of action" in an act of war can be considered traitors.  It says nothing about whether some sort of declaration of war is required.

Now let us move on to Marshall's decision in the Burr trial.  I excerpt the pertinent part of what Marshall had to say:

"Those only who perform a part, and who are leagued in the conspiracy, are declared to be traitors.  To complete the definition both circumstances must concur. They must “perform a part,” which will furnish the overt act; and they must be “leagued in conspiracy.” The person who comes within this description in the opinion of the court levies war."


No formal declaration of war required. 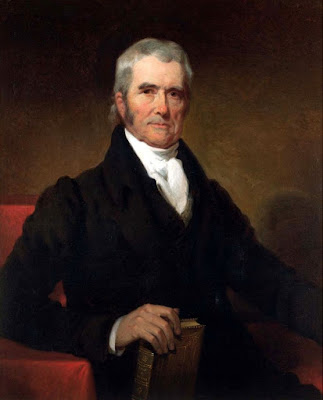 And that is the substance of the argument made by Republicans to absolve their President of treason; i.e. no substance at all.  Nowhere in the Constitution or in the supposedly pertinent criminal cases is this issue addressed.

Now, I wish to pass on to a prescient comment made by James Madison, on behalf of himself and the other writers of the Constitution, in Federalist Paper #43:

"...new-fangled and artificial treasons have been the great engines by which violent factions, the natural offspring of free government, have usually wreaked their alternate malignity on each other"


Is there a better description of the Russian interference in our Presidential election via technology only a couple of decades old than "new-fangled and artificial treason?"  The Russian hacking is clearly exactly what Madison was contemplating, although he could have never predicted its exact form.  And it requires no stretching of the imagination to understand that Donald Trump did “perform a part” which will furnish the "overt act;" and he was “leagued in conspiracy.”  And remember that

"The person who comes within this description in the opinion of the court levies war."


I.e. is guilty of treason.  For Congress to back away from this obvious fact is to betray its duty.

Grung_e_Gene said…
At this point, there is no need to make nice with the Trumpublican Party. Based on the Mueller Report and his repeated attempts to get foreign Intelligence Services to covertly undermine the 2020 election Trump and his cabinet members should be charged with Treason. The Democratic Leadership should not preemptively attempt to restore comity while Trump is inciting Civil War and squawking little a syphilitic chicken about 'Coup', 'Coup', 'Coup'!!!
October 2, 2019 at 12:22 PM

Green Eagle said…
Gene, just for your information, at Green Eagle, we do not approve of insulting syphilitic chickens. Green Eagle feels a great deal of responsibility to defend other birds. Other than that, right on, brother.
October 2, 2019 at 1:21 PM

joseph said…
GE,
The Rosenbergs were convicted of espionage and executed. Didn't Trump give state secrets, the names of spies, to the Russian ambassador? Isn't that just what we know about, isn't is clear to any sentient human being that an investigation would reveal far more espionage activities by Trump? In this case, and Rosenbergs, aren't espionage and treason not merely intertwined but really the same thing?
October 3, 2019 at 2:00 AM

Green Eagle said…
I think that there is treason that is not espionage. Trump's compromising our long standing alliances to benefit Vladimir Putin, for example, is a clear example of "giving aid and comfort to the enemy," but is not espionage.
October 3, 2019 at 9:55 AM

Dave Dubya said…
The Toddler Tyrant is absolutely a traitor. First by welcoming help from Russia, (Russia if you're listening.) and then openly betraying our country by siding with Putin in Helsinki.

Who knows how many more crimes have been committed? And the entire Republican Party is now abetting their criminal Mob Boss.

If they are not removed from power, the republic is dead.

Green Eagle said…
I believe his crimes since taking office number in the hundreds. This is a mind boggling spectacle. I have thought for decades that the Republican party is nothing but a criminal conspiracy, but I never thought it could sink to this.
October 5, 2019 at 6:54 PM