To keep up with my documentation of the fact that the hard right in this country is essentially a fiction, here is a photo, from Right Wing Watch, of this year's march on Washington by the National Organization for Marriage: 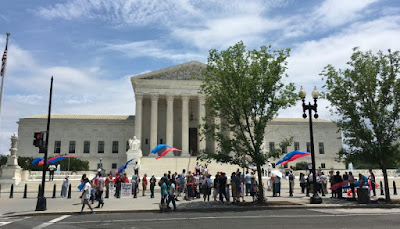 The  person who posted this said they counted 48 attendees, including a number of small children.

Again, I want to point out how many people on our side of things are still like children afraid of monsters under their beds, cowering in the face of a mirage.  Other than vast amounts of money from rich psychopaths which allow them to spread their lies, the right wingers have just about nothing.  There is really no huge "silent majority" behind them.  God knows, nothing can keep them silent for a minute; if they are silent it's because basically they don't exist.  It's long past time for every one of us to stand up for truth and decency, and not worry about being shouted down by a member of this loathsome, and minuscule pack of sorry excuses for human beings.

Here's a rally called by neo-Nazi leader Richard Spencer yesterday in Washington.  Despite being one of the most high profile far right leaders in the country, he drew less than 100 people. 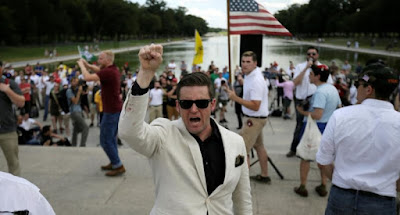 I won't repeat the conclusions I drew above.
Posted by Green Eagle at 9:45 AM

Probkem is that the entire Republican party is willing to pander to this tiny demographic. As long as they can cut taxes and roll back women's rights, they're willing to get along with neo Nazis.

And yet they seem numerous on the internet which proxies as reality for a lot of people. I can go to some YouTube pundit who will rip the far Right to pieces in one video and that video will have (looking at an example...) 79K views, nearly 5K likes, 751 dislikes, 2K comments many of which are apparently dribbling Right wing imbeciles. The qualification of course is that a lot of these 751 dislikes, representing dickheads who have never achieved anything and so cling to ancestry as their proof of personal glory, are not in America. 20 of those dickheads will be Odin-worshipping morons in Norway or somewhere, and when they are not disliking videos they are arguing with each other whether Christianity is bad for the master race. Nothing much unifies the far Right except race. All the other issues are cover for saying what they want is White men in charge and everyone else paid in bananas to mow their lawns. That's it. Apart from also wanting women to be less pushy so they don't feel their manhood threatened by a walking womb. Even anti-same-sex marriage arguments are partly rooted in a panic that White people will somehow all stop having kids and therefore die out. Imagine what it must be like to live your life inhabiting a mind like that.