December 27, 2016
This news, which will undoubtedly bring a smile to Trump supporters:

"A neo-Nazi Donald Trump supporter is planning an armed march to terrorize Jews in a small Montana town next month...Organizer Claims Hundreds Will Carry 'High-Powered Rifles' To Terrorize Jewish Residents.


(Andrew) Anglin says he's planning an armed march through Whitefish in January "against Jews, Jewish businesses and everyone who supports either." A web graphic announcing the march (pictured, with faces of residents blacked out) included a photo of the entrance to Auschwitz and a yellow Star of David with the word “Jude” printed in it." 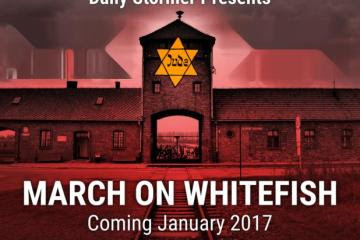 Look for a lot more of this in the coming four years.

I do, however, have one helpful suggestion for Donald Trump.  He is apparently having an awful time getting people to march in his inaugural parade.  Instead of the usual high school bands, Donald, why not extend an invitation to these guys, who are practiced and ready for the occasion?