August 22, 2015
Well, I'm back from the Canadian Rockies (very nice) and ready to start complaining again.  In truth, as far as I can tell from the very limited internet connection I had in the last two weeks, not much has changed in the world. Here's something that bothered me at the time and which may be old news at this point, but I want to say something about.

There is no one in the U.S. Congress with a stronger civil rights record than Bernie Sanders.  Since at least 1963, he has been working for equal rights, even being arrested in the process.  So why did a Black Lives Matter activist, one Marissa Johnson, choose him to attack in public, in a transparent attempt to damage his standing among minorities? 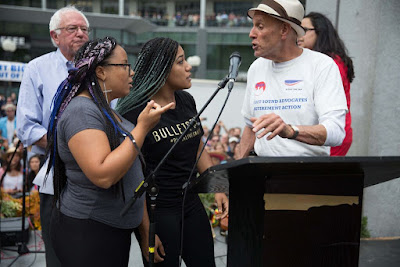 Well, maybe a clue can be found in her statements about who she really is:

"My parents are both Tea Partiers. I'm mixed. My mom's white and my dad's black. And they're both big Tea Partiers and that's how I was raised....I do want to say I am a very devout Evangelical Christian... And people who know me locally and nationally in my organizing work know that that is why I do what I do. And so yes, I did run up there and confront Bernie Sanders because of my religious convictions, absolutely."


Of course, she brackets this with a couple of pro forma claims that she's really, really left wing now, but of course if she is, she's the only fundamentalist Christian on earth that is driven by her religion to have progressive values.

I am going to state the obvious and then be done with this:  Marissa Johnson is a right wing dirty trickster no different from James O'Keefe and the people who made the lying videos about planned parenthood.  She had only one intention on earth, and that was to damage black support for their greatest ally in the Presidential race, by playing on the same mindless rage that drives right wing thinking across the country.  Of course, she or her handlers counted on the mainstream press to ignore that obvious fact, so it worked.  All's fair in love and politics, I guess.  At least Republican politics.

joseph said…
"...she's the only fundamentalist Christian on earth that is driven by her religion to have progressive values" Well, there is the Pope.

Green Eagle said…
I don't actually consider him a Fundamentalist. Evangelical, Fundamentalist Christianity is, I think, a Protestant phenomenon, which grew out of the break between Church and State that occurred in England and Northern Europe. Yes, a lot of very blind Catholics have been manipulated by the Church into adopting positions (like abortion) which agree with those of the fundamentalists, but at heart, I don't see them as fundamentalists themselves. I'm not an expert on the Church, so I could be wrong here, but that is my understanding.
August 22, 2015 at 10:28 PM

This is true. Strictly speaking, a "fundamentalist" is one who insists that the Bible must be taken as absolutely literal truth, not interpreted metaphorically. This is an entirely Protestant phenomenon -- the Catholic Church has never embraced the concept of strict Biblical literalism, preferring to allow interpretation broad enough to support the authority of the Church hierarchy.

Also, Pope Francis doesn't have "progressive values" by any rational standard. Even if he's said a few things about gays that could be interpreted as liberal, most of his views are very much in line with reactionary Catholic orthodoxy.
August 23, 2015 at 7:14 PM