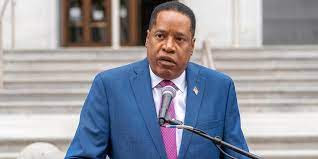 I suppose just about everyone has heard of Larry Elder at this point- the guy who is the front-runner to replace Governor Newsom in California if the latest Republican attack on democratic elections manages to succeed.  If Republicans manage to pull this off, Elder, who is currently polling in the mid- twenties, could replace Newsom even if Newsom fell one vote short of a majority, thus taking us one step closer to a country where Republicans take over all of government, regardless of whether they win elections or not.

Most people know that Elder is a right wing talk show host, and immediately understand that he has spent the last few decades pushing every right wing lie in the book, but they are likely unaware that this guy has always had a particularly sickening specialty that sets him apart from, and below, virtually any right wing talker you can think of.

I first encountered Elder in the late 1980's, when he was a local broadcaster in LA, on KFI, the same station that (of course) carried Rush Limbaugh.  Sure, Elder earned his pay by spouting all the usual right wing propaganda, but his real specialty, on which he must have spent half his on-air time, was blaming black people for every single bad thing that ever happened to them, over and over again, week after week, year after year.  It was not his speaking ability or intelligence that was valuable to the Republicans, but his black face, which he was happy to supply for his thirty pieces of silver.

There are so many ugly, evil people to be found in the world of right wing propaganda, but even among this company, Elder stands out as a truly despicable individual.  From Reagan to Bush to Trump and now to the likes of Larry Elder, this is how far the Republican party is willing to descend; and it's not over yet.  Too bad Charlie Manson and John Wayne Gacy are dead, because they would be next in line.

i thought he withdrew? will the right wing boat ever sink?

By far, the most insane thing Elder has ever said was the time he spoke at some conference and starts in on Reparations.

-->Talking about the need for reparations to Slave-Owners for their loss of their property (slaves).

He's the most Uncle Tom ever.