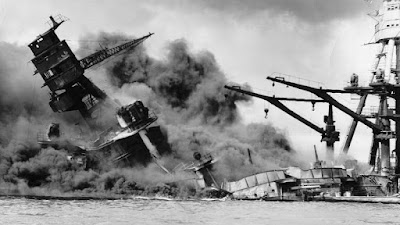 Today is December 7th, the anniversary of the Japanese attack on Pearl Harbor, perhaps the most shocking day in the modern history of the United States.  It is perhaps a fitting occasion to think of the war that was about to engulf the United States- a war that would claim fifty million lives.

It is also a fitting occasion to remember this:

“Hey, John, what’s this all about? What’s this a tour of?” Mr Trump reportedly asked John Kelly, his then-chief of staff, when they took a private tour in 2017 of the USS Arizona Memorial, a ship commemorating the surprise Japanese attack on Pearl Harbor during the Second World War."

As a person of about Trump's age, knowing as I do what it was like being a child in the aftermath of World War II, it is almost inconceivable to me that any American who was not seriously mentally incapacitated or deeply schizophrenic could be ignorant and indifferent to our history to the degree that they did not know what happened at Pearl Harbor.

The people who voted to put him in the White House, and the nauseating 73 million that apparently voted to keep him there are going to have a lot to explain.  Let's not let them off the hook for the disaster that they brought upon our country, and let's see to it that they are forced to answer for their willful derangement.

Donald recognizes the ultimate sacrifice made by the military in WWll by saying “Happy Memorial Day” to Japanese troops.

The Japanese military killed many, many thousands of American troops.

Trump prefers battleships that didn't get sunk, okay. He prefers victories to defeats, and Pearl Harbor was a defeat.

He would rather think about the US winning the war because all those soldiers trained at bases named after Confederate generals, than about the fear that Pearl Harbor caused that we would lose.

If Trump thinks soldiers buried at Arlington are "suckers and losers" I hate to think what he'd say about the sailors killed at Pearl Harbor. The man is a monster.

Can anybody with a brain think of any tRumps positives? I surely have a hard time finding ANY!