This short post is in reply to (and agreement with) Flying Junior, who said in a comment, "No way it's the virus."

What this situation reminds me of is the start of World War I.  We were all taught that the war was started by the assassination of Archduke Ferdinand in Serbia in 1914.  The truth is that the origins of World War I go back at least to the early 1890's, when Kaiser Wilhelm II pushed Otto Bismarck out of the German government, and the careful balance of powers that he had created began to unravel.  It was only after numerous incidents that brought Europe to the brink of war- the Agadir and Morocco crises, the English and French fight over Egypt and the Sudan, two Balkan wars that have almost been forgotten- that things had reached a point so explosive that what might have been a fairly minor event managed to push the continent into war.  In the same way, what we see here is the result of criminal mismanagement of the economy by Republicans, that has been building at least since the Reagan administration, and is strikingly similar to the way the Republicans virtually deliberately created the Great Depression and caused World War II.  And once again, it has been their lickspittle servility to the hyper-rich that caused the whole thing.

The market dropped over 2,000 points today, not only the largest point drop in the entire history of the Dow, but well over double the 778 point one day drop brought to you by George W. Bush.  Trump now owns the 11 greatest daily point drops in the history of the stock market, and sixteen out of the top 20, the other four belonging to Republican President George W. Bush. 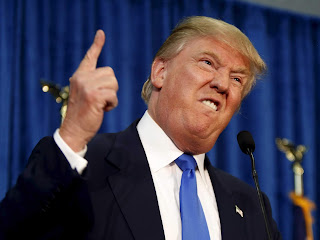 All wars are started by armed robbers who hide behind the "government" label.

It's been one of my theories for years. Every time I hear the smug radio and TV guys explain the latest market swing to me I think, "If it's that easy to explain, why is it nearly impossible to predict?"

I see the economy as dangerously inflated. With no surplus to fund the federal government, our nation is like a consumer living on frayed and over-extended credit. We've had near-zero interest rates for over ten years. The policies that were designed to fuel economic recovery have been continued throughout years of prosperity. We've given up on balancing the federal budget as if somehow it didn't matter any more. What money was available to the government for infrastructure and other government functions has been neatly packaged up and returned to the investor class. It's like a Ponzi scheme right before the big bust. With consumer debt and student debt at all-time highs we fly bravely into the wind like a jet airliner on its last five hundred gallons of fuel.

Trump keeps his eyes glued to the Dow-Jones like a kid flying a kite. The slightest dip and he is ready for more drastic measures such as this ill-advised payroll tax cut. His followers see the numbers as a guarantee of fantastic income during retirement.

Marriage restoration..Stop your marriage from breaking apart today. I lost my husband to another woman 2 weeks ago after 27 years of marriage . We had a lovely marriage but he started a relationship with a co worker who chased after him . He is living away near his work and her and refuses to talk to me or to come home . I am devastated and am finding it hard to cope . I wish I did not love him and that I could move on but I can't . I don't know how to stop feeling like this I wish I didn't as its eating me away and I m starting to feel ill. I have degraded myself begging him to come home all to no avail. I became very worried and needed help. As I was browsing through the internet one day, I came across a website that suggested that Chief Dr Lucky can help solve marital problems, restore broken relationships and so on. So, I felt I should give him a try. I contacted him and he did a spell for me. two days later, my husband came to me and apologized for the wrongs he did and promise never to do it again. Ever since then, everything has returned back to normal. I and my family are living together happily again.. All thanks to Chief Dr Lucky. If you need a spell caster that can cast a spell that truly works, I suggest you contact him. He will not disappoint you. if you have any problem contact him, I give you 100% guarantee that he will help you, This is his details,Email him at: Chiefdrlucky@gmail.com you can also call him or add him on Whats-app: +2348132777335 Website :  http://chiefdrluckysolutionhome.website2.me/