March 12, 2020
President Trump, after his Oval Office address last night, when he didn't know the microphone was still on:

I guess that pretty much shows how much he really cares, or even understands what is going on, better than his eleven minute, nearly somnambulistic address did.  And if you wonder how the rest of the country responded to his attempt at inspiration, you can just look at the stock market, which his address was designed to stabilize.

Here's the chart, and it is not a pretty picture: 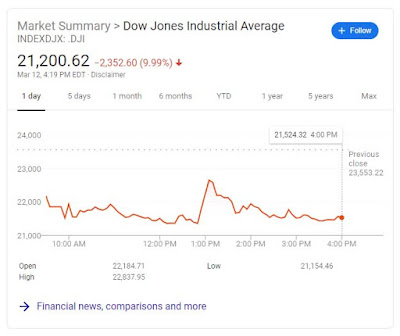 Here's what happened today: Immediately upon opening, the market began collapsing, resulting in an early suspension of trading*, which probably prevented a 4,000 or 6,000 point collapse today.  Then, when the trading resumed, it drifted lower, until the Fed (undoubtedly reacting to a bullying rage from Trump) announced an absolutely unplanned injection of half a trillion dollars into the economy.  You can see the result in the chart above, starting a little before 1:00 pm.  That worked great- for about fifteen minutes, and then the market resumed its crash, essentially throwing all that money in the trash.

A loss of 1,124 points, just about wiping out the 15 minute rally.  I hope Trump enjoyed it while it lasted.

This brings the total losses in the Dow Jones average, from its peak exactly a month ago, to over 27%.  By comparison, consider this:

"The stock market crash of 1929 was a collapse of stock prices that began on Oct. 24, 1929. By Oct. 29, 1920, the Dow Jones Industrial Average had dropped 24.8%, marking one of the worst declines in U.S. history. It destroyed confidence in Wall Street markets and led to the Great Depression."


As of today, the collapse of the Trump market has now exceeded the first onslaught of the Great Depression.

And here is a historical lesson we should all have learned by now: 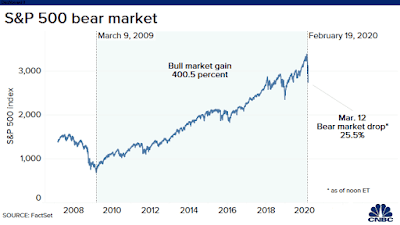 This shows the Standard and Poors index from 2008 to the present.  In the last year of the Republican George W. Bush administration, the market lost half its value, with the Dow descending from 14,066 to 7062, and bottoming out one month into Obama's first term.  In his eight years, Obama saw the Dow rise 280%, or an average of 35% per year.  As of today, the first three years of the Trump administration saw the Dow go up 8.6%, or a grand total of 2.9% per year- less than one tenth of what Obama brought us.  And who knows what is going to happen tomorrow, or next week, or next month?

The truth is that, thanks to the ministrations of Donald Trump, the nation is on the verge of a depression, and nobody in the mainstream media seems willing to state the truth clearly.  And here is more truth:  Of the 20 greatest daily point losses in the history of the Dow, 17 happened under Republican administrations.  Three happened under Democrats, including two in the FDR administration that were clearly aftershocks of the 1929 crash, and one in 1917, during World War I.

If we have any hope of economic survival at this point, it is only going to come through crushing Republicans and their lying economic cant, which was designed for nothing but to loot the economy on behalf of the super rich.  This Republican incompetence and criminality must be a central issue in the coming election.  We cannot afford to fall prey to Republican blandishments; if we do it again in November, I cannot see any way that the country could survive the next four years.


Just a note:  The provision to suspend trading in cases like this, which probably prevented today being remembered in history as the start of the Second Great Depression, is not an old law.  It was part of the Dodd-Frank controls put into place after the 1987 collapse.  Donald Trump has done everything he can since becoming President to do away with that legislation.

Anonymous said…
Superb post, we enjoyed each and everything as per written in your post. Thank you for this informative article because it’s really helpful, I really like site.
Please visit our website: @ Packers and Movers Ahmedabad
March 14, 2020 at 12:09 AM

Packers And Movers Kolkata said…
Superb post, we enjoyed each and everything as per written in your post. Thank you for this informative article because it’s really helpful, I really like site.
Please visit our website: @ Packers and Movers Kolkata
March 14, 2020 at 10:52 PM

Unknown said…
Marriage restoration..Stop your marriage from breaking apart today. I lost my husband to another woman 2 weeks ago after 27 years of marriage . We had a lovely marriage but he started a relationship with a co worker who chased after him . He is living away near his work and her and refuses to talk to me or to come home . I am devastated and am finding it hard to cope . I wish I did not love him and that I could move on but I can't . I don't know how to stop feeling like this I wish I didn't as its eating me away and I m starting to feel ill. I have degraded myself begging him to come home all to no avail. I became very worried and needed help. As I was browsing through the internet one day, I came across a website that suggested that Chief Dr Lucky can help solve marital problems, restore broken relationships and so on. So, I felt I should give him a try. I contacted him and he did a spell for me. two days later, my husband came to me and apologized for the wrongs he did and promise never to do it again. Ever since then, everything has returned back to normal. I and my family are living together happily again.. All thanks to Chief Dr Lucky. If you need a spell caster that can cast a spell that truly works, I suggest you contact him. He will not disappoint you. if you have any problem contact him, I give you 100% guarantee that he will help you, This is his details,Email him at: Chiefdrlucky@gmail.com you can also call him or add him on Whats-app: +2348132777335 Website :  http://chiefdrluckysolutionhome.website2.me/