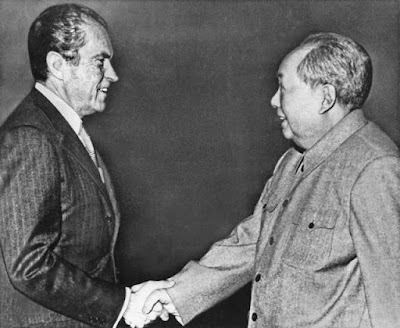 This is a photo of a Republican President doing what was unthinkable just months before- meeting face to face with a dictator who had engineered the most massive Communist takeover in world history.  This dictator was the head of the largest country on earth, which was a potential threat to any other nation, including ours.  This President went on to become the most disgraced President in our history, but in this act of diplomacy he managed to utterly and permanently change our relation to China forever, and pave the way for a land which is still under authoritarian rule, but which has joined the general community of nations, and is now tied to us by a web of common interests. 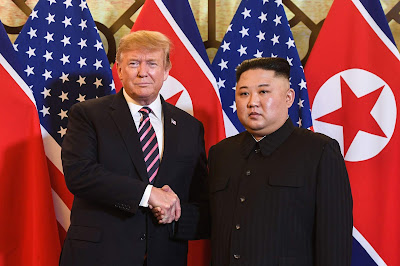 No, this is not a sick parody of the above picture, but it might as well be.  Here we have an American President meeting with a vicious dictator of a pathetic, backward country whose population is less than one tenth the size of ours, and beginning to make free concessions to this thug before being totally humiliated by him on the world stage.

Listen, I care very little about the fate of Otto Warmbier, an American student who appears to have been tortured to death in North Korea, but once again, it served as an occasion for Trump to publicly state his belief in the words of a murderous dictator over the united opinion of our intelligence services:

"I will take him at his word": President Trump says he believes Kim Jong Un didn't know what happened to Otto Warmbier, the American college student who was imprisoned in North Korea and died days after returning to the U.S. in a coma.


President Trump’s refusal to blame Kim Jong-un for the death of Otto Warmbier, an American student who died in 2017 after being imprisoned in North Korea, set off anger and sympathy for the young man’s family among political leaders in the United States on Thursday.


Before their summit meeting in Hanoi, Vietnam, ended abruptly, Mr. Trump said that he and Mr. Kim, the North Korean leader, had discussed Mr. Warmbier and that Mr. Kim felt “badly” about what happened to the American...Referring to Mr. Kim, Mr. Trump said, “He tells me that he didn’t know about it, and I will take him at his word.”  He also said: “I don’t believe that he would have allowed that to happen, it just wasn’t to his advantage to allow that to happen."


The Hanoi summit meeting between Trump and Kim has now ended, with absolutely no progress on any front, except in so far as it provided more legitimacy to Kim's status on the world stage.  Trump humiliatingly fled from the meeting, and from the country of Vietnam altogether, cancelling a planned joint statement and press conference, heading to his plane and hightailing it back to the United States.  The World's Greatest Negotiator flew halfway around the world and got zero, except another massive humiliation from a cheap thug.

Maybe the luckiest thing that ever happened to this pathetic criminal is that his gigantic failure at the hands of a 32 year old ignorant jerk came on a day that was devoted to evidence that the aforementioned President is nothing but a corrupt con man of the lowest type; I cannot remember a President of the United States ever having a summit meeting go so badly.

Unfortunately, when it comes to Republicans, enough is never enough if they are getting what their rich donors want, so the combination of foreign policy collapse and domestic criminality, which in the first two and a half centuries of our country's existence would have resulted in the immediate removal of this guy from the White House to the big house, will mean nothing to them.  They will deny his incompetence and moral bankruptcy to their dying days, because they are, every single one of them, as bad as he is.

Still not over Hillary's loss.

What, I'm still not over having the Presidency stolen by a traitor in league with a foreign dictator? You're damned right about that, buddy.

Ed, what in blazes does HRC have to do with the above posting? What parts do find so unpalatable that you have to deflect with such tripe?

I am beginning to subscribe to the theory that the country's divide is between the stupids and the not-so-stupids.