Political Violence By The Numbers

October 30, 2018
I've seen the following graphic a couple of places lately, but I think it reveals a fact that should be made clear to every American, so I'm posting it here, too. 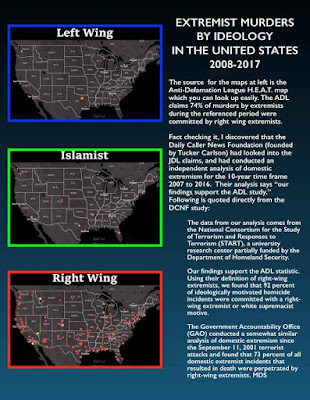 I have often heard that right wingers commit more acts of political violence than any other group in this country, but I had no idea how one sided this was.  These people are monsters, and the President and leaders of his party are monsters too.  Today, Trump announced his intent to abrogate the Constitution by an "executive order." And with the Supreme Court now fully packed with corrupt Republican appointed Justices, who can say that he will be stopped if he tries?  Meanwhile, more and more criminal thugs with guns are out there to destroy anyone who gets in his way.

In a sane country, this man would be impeached in one day if he tried to do this.  But we don't live in a sane country any more.  We live in a country where some destitute people fleeing terror a thousand miles from the United States are more of a threat than these fascist killers that roam among us.

FDR was almost assassinated, but they missed and got a Governor.

If we follow that history Trump should be dead by an assassins bullet along with many other politicians.