October 17, 2018
Once again, we are about to suffer another round of one of the biggest lies in history:  the notion that Democrats and their social programs are responsible for the deficits that have plagued the country since Reagan took office.  Since that time, it has been the deliberate attempt of Republicans to destroy social spending, and thieve the money to give to their sociopathic rich backers, thus accomplishing two purposes: enriching their billionaires enough to keep them providing the money to flood the country with propaganda which keeps the Republicans in office, and also to achieve a long time goal of Republicans, deliberately destroying Social Security and Medicare, the two greatest Democratic contributions to the well-being of the American people.  Here is the hideously evil Mitch McConnell, being blunt about his intentions:


Nearly a year ago, as the debate over Republican tax breaks for the wealthy was near its end, Senate Majority Leader Mitch McConnell (R-Ky.) insisted that the tax cuts didn’t need to be paid for – because they’d pay for themselves...Whether the GOP leader actually believed his own rhetoric is an open question, but either way, we now know the Kentucky senator’s claim was spectacularly wrong. The Republican tax breaks have, as Democrats and those familiar with arithmetic predicted, sent the nation’s budget deficit soaring.


Senate Majority Leader Mitch McConnell on Tuesday blamed rising federal deficits and debt on a bipartisan unwillingness to contain spending on Medicare, Medicaid and Social Security, and said he sees little chance of a major deficit reduction deal while Republicans control Congress and the White House.


“It’s disappointing but it’s not a Republican problem...Medicare, Social Security and Medicaid” funding constitutes “the real driver of the debt.”


Thus it has become necessary to delve into this preposterous, malignant lie, and once again point out the real source of government debt.  Here are two charts that pretty much tell the story.  I am sorry, but I was unable to find one graph that showed the entire time span; resulting in it being divided up this way. 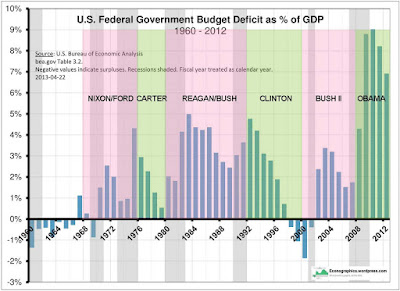 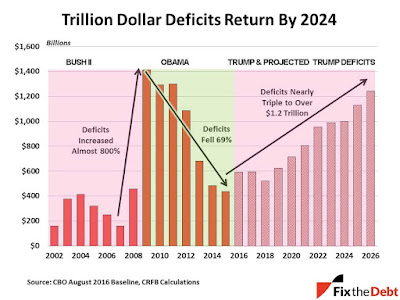 To summarize this information:  The budget deficit in the last year of the Carter administration was $41 billion; seemingly a laughingly small amount after what we have seen since, but already enough for Republicans to demand cuts to social programs to deal with it. Under Reagan and Bush I, this number increased to $290 billion, or over seven times the last deficit under Carter.  The next Democratic President, Clinton, evaporated the deficit, and left the succeeding Republican President, Bush II, a $236 billion dollar surplus.  Bush II, through a combination of tax cuts for the rich and an unfunded war of aggression, precipitated an economic collapse which left the country with an annual budget deficit of $1.4 trillion dollars.  Obama, despite constant Republican attacks on everything he tried to do, reduced that deficit by over two thirds.  Now, from the moment the Republican Trump took over, the deficit is on the way up again, thanks in large part to the theft of six trillion dollars in tax money from the American people to give to the rich.  By 2019, the Trump deficit is projected to reach $984 billion, over twice the $438 billion dollar deficit left by Obama after superhuman effort to diminish the consequences of Republican economic malfeasance.  That number, due entirely to the corrupt actions of the last several Republican administrations, is almost exactly 24 times the deficit left by Jimmy Carter, before the Republican pillaging of the economy began.

And let us remember one more gigantic lie that Republicans are now telling.  Social security is entirely self funded, and does not receive one penny from the general government budget.  In fact, Republicans have raided vast sums of money from the Social Security funds, which they never had any intention of paying back.

This is the story, and do not ever let anyone tell you differently:  The national debt of the United States is virtually entirely due to Republican corruption and theft.  Of course, they will fight to the death the notion that the billionaire beneficiaries of that theft should ever have to give up a penny of their criminal proceeds.  No, it is, as usual, everyone else who must pay the price.  And the Republican party will continue pounding the American people to accept this monstrous deception as long as that party continues to exist.  After half a century watching this phenomenon, I am convinced that any path back into the light for the United States must involve the extermination of the Republican party, and the decisive demolition of the great economic lies that it has served up for a hundred years.

Yearly statistics for the federal budget deficit can be found here, if you are interested.

Jerry said…
The Republicans have been building the debt and deficits on purpose over the decades so they could cut then attack and kill off Social Security and Medicare and other liberal programs they have hated since FDR and LBJ got them passed.
October 20, 2018 at 11:46 AM

Flying Junior said…
Honestly I doubt that the Trump deficit will be less than $1 trillion even for fiscal 2018. From what I can thumbnail we are borrowing close to $4 billion every day. Of course, the fallout from the Great Republican Tax Heist of 2017 hasn't even hit us yet. I'm guessing the big shortfall will occur in early 2019 or even later this year. I wouldn't be surprised by $1.4 trillion to $1.5 trillion deficits for the foreseeable future.

Green Eagle said…
I think that is probably a pretty good guess, unless they are lying to us (they are Republicans, after all) and things are worse than we know.
October 22, 2018 at 7:25 PM