Unite the Right 2 Takes to the Streets, Hooah!

I guess I will file this report on the great national Unite the Right 2 march that happened in front of the White House this weekend, on the first anniversary of the great Charlottesville riot that did so much to establish Nazis as deserving of a place in our national political life, just to keep up my record.

This event was the beneficiary of an immense amount of publicity from both right wing sources and our mainstream press, so I think it should be indicative of the real strength of the right in the United States.  Well, here it is: 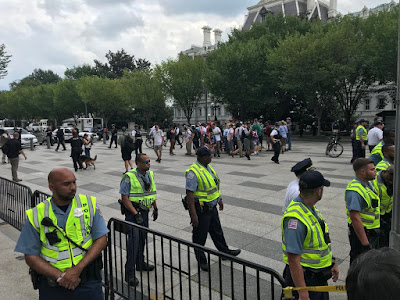 Yup, that's it:  about thirty people in a national march after receiving immense publicity.  Here's a little of the coverage in the local paper: 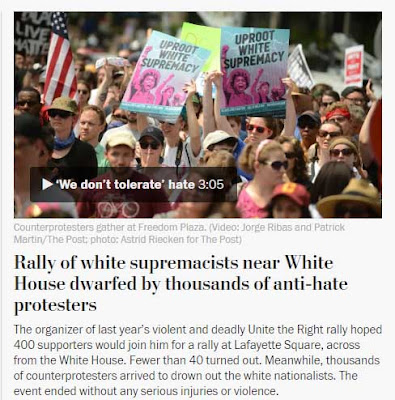 I want to comment on what this latest in an endless string of humiliating failures by the right means.  First of all, let me make it clear that none of us can deny being stunned in the last couple of years by the sheer number of white people filled with hatred and violence that there are in this country.  But we can take some comfort in the fact that the overwhelming majority of them are too fat, stupid, lazy, old or drunk (or a combination of the same) to do a damned thing to further their hatred.  Yes, they may manage to stagger down to the local polling place to vote every couple of years, and that in itself is a tragedy.  But evidence like this indicates that those who either fear or are praying for a new Civil War are likely to be deeply disappointed in this era's Johnny Rebs.
Posted by Green Eagle at 10:42 AM

As I like to say when they threaten this, "What are they going to do -- seize another bird sanctuary visitor kiosk and forget their socks again?" Based on this "rally", they probably won't even be able to manage that.

"too fat, stupid, lazy, old or drunk (or a combination of the same)"