Donald Trump:  "We're on track to hit the highest annual average growth rate in over 13 years and I will say this right now, and I'll say it strongly."


A lie, of course, from the man who has told thousands of them in the last two years..  NBC news has this reply:


If you go online, you find various accounts, for some reason, of what the quarterly growth rate has been the last decade.  Here is one I found, in the middle of the pack: 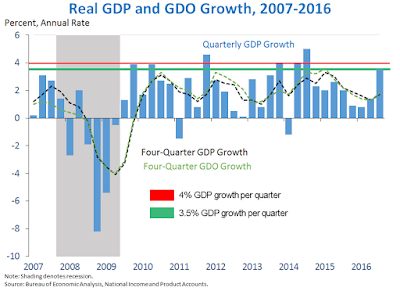 I added the lines, at 4% growth and 3.5% growth.  Whatever the exact numbers, you can see that as expected, Trump's grandiose claims that he has produced unique growth are far outside the realm of reality, particularly given constant Republican attempts to sabotage the economy during the Obama administration.

Anyway, here is my prediction:  The 4.1% number that Trump is slinging around is a preliminary estimate.  Anyone who follows these statistics knows that a couple of months later, a real number is published, and if you have followed this issue closely, you will know that the preliminary number has often been tampered with by Republican administrations, at least since Nixon.  I suspect that the revised number will not emerge until after the election, and that it will be substantially lower than Trump's boasting.  By then, of course, the Republicans will have milked this lie dry, and the press, having let him live on the lie, will pretty much ignore the real numbers.

I could be wrong, but that's what I expect.