November 19, 2016
It is a very minor, negligible story in the news today, that the President Elect of the United States agreed to pay $25 million dollars to "settle" fraud charges against himself, thereby admitting their truth, since no one can be stupid enough to come to any other conclusion in this case.

Hillary having done something with her e-mails, which eluded millions of dollars of Republican "investigations" designed to find anything wrong that she did, on the other hand, was subjected to literally thousands of stories in the mainstream press about this utterly bogus issue.  Take a look at this little chart, from Media Matters: 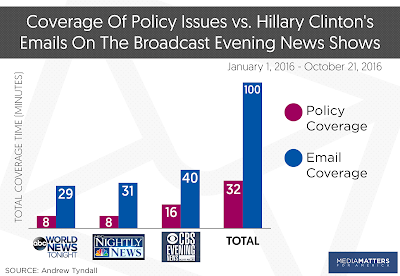 Those other columns in the bar graphs, includes any consideration of Trump's long record of criminality, and his connections with a foreign spy agency.  But no, all of that was of nearly no importance compared to what every single member of the press knew was an utterly meaningless fake scandal.

This is why we now must face a would-be dictator in the White House.  Essentially, this is the only reason.  And let us remember that reporting like this is one hundred percent the result of actions by Ronald Reagan and Newt Gingrich to allow essentially our entire mainstream press to be bought by a minuscule number or rich Republican sociopaths.  That too, by the way, is of course a story not worth covering.

People who voted for President this year voted for either fake malignant Hillary or a fake whitewashed Trump.  This is not anyone's idea of a fair election; it is a carefully paved steppingstone from democracy to totalitarian rule.  Until this sort of "free" press is crushed, the United States that has existed since the eighteenth century is dead.  And let me make myself clear, that the term "free" as applied to our current media only means the freedom of hyper-rich criminals to own the press and use it for their own purpose, which is to enrich themselves further at the expense of everyone else, and use the government to crush anyone that stands in their way.

Unfortunately, I see exactly zero way to change what we now have in the way of a free press, so I predict that if democracy ever rises again in this country, it is going to be after a period of dictatorship, followed by a vicious rebellion of some sort, because the Trumps and McConnells and Paul Ryans of this world are never going to give it to them voluntarily.

Infidel753 said…
Even the e-mail rubbish wouldn't have worked had it not been for the Republicans spending two decades relentlessly smearing Hillary with everything they could think of. They generated so much smoke that a critical mass of people thought there must be a fire somewhere.

And even after that, she still got more votes than Trump did. If we'd done something about the Electoral College during the last four years, we wouldn't be in this mess now.

I agree that the media have become pretty worthless at reporting real news, but I'm not so pessimistic about the future. Most of the things Trump promised that got the base riled up to vote for him are things he can't deliver (we're not getting tens of millions of high-paying blue-collar jobs back unless he figures out how to un-invent modern automation, and Congress isn't going to vote billions for his stupid wall when net illegal immigration dried up ten years ago). Eventually even they will realize they've been conned.
November 19, 2016 at 2:20 PM

Grung_e_Gene said…
Pffff, big deal. We almost had a woman elected. Fortunately, Trump was awarded the Presidency with less votes.
November 19, 2016 at 2:50 PM

Green Eagle said…
You guys are just so cheerful! Sorry, maybe I will think differently in a few months, but today I think the United States is over. We'll see.
November 19, 2016 at 4:18 PM

Magpie said…
Three blocks from the White House Richard B Spencer and his buddies are celebrating because they believe their moment has come.

The level of distortion via all forms of media is so total that only a handful of people, such as you fine gentlemen, are even conversant with the forces that are at work. I'm not sure Trump's base will later realise they've been had. I think they will just retreat into further irrational fantasy. They don't have the tools to climb out of it.

It's not looking pretty.

Willie Z said…
Please stop your reliance on bars. We don't want you to die from cirrhosis of the liver or alcoholism. We'd rather have you die of old age instead.
November 20, 2016 at 5:52 AM

Green Eagle said…
I assume you are being sarcasti, Willie, but Green Eagle is a very moderate drinker, going for quality over quantity. The time I spend in bars is almost exclusively to see bands with members we know, and I have a strict one drink per set limit.
November 20, 2016 at 11:42 AM

Green Eagle said…
One of the benefits of being a Lagavulin drinker- most of us can't afford enough of it to do much damage.
November 23, 2016 at 2:41 PM