December 03, 2013
Well, I can't resist this.  Here's and article entitled "Top 50 reasons people keep comparing Obama to Hitler," by a guy who says:

"...anyone who dares to notice the similarities between our Constitution-shredding Black Panther-in-chief and other racist dictators is still being met with the same hysterical shrieks, convulsions and fainting as always from the book-burning tyrant-worshipers of the left...Here are the top 50 reasons that sensible people cannot help but make this painfully obvious connection:" 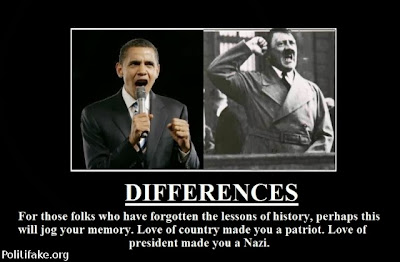 Well, we're not going to sit through all fifty of them, so Green Eagle will do you the favor of offering a selection.  Here we go:

"50) He blatantly violated bankruptcy laws to force through payoffs for unions."

"49) He tried to persecute George Zimmerman after he had been exonerated in a court of law."


What Obama did to persecute George Zimmerman I am not sure, but Hitler didn't have to worry about things like this because people he didn't like were never "exonerated in a court of law."  They were just killed.

"44) He blatantly disregarded an order by a federal judge to stop illegally trying to shut down all American energy exploration."


Well, of course, no he didn't, but once again, if he had, he would be just like Hitler, who was so known for shutting down energy exploration. 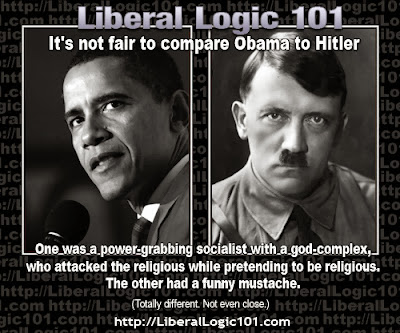 
So like Hitler, who just had no respect for energy laws.

"31) He illegally ordered his Department of Justice to stop enforcing the Defense of Marriage Act."


Just like Hitler again, who was, I guess, the world's most famous proponent of gay marriage, right?

"26) He criminalized being a conservative in the military."


So right on this one.  If there is one thing that Hitler would never tolerate, it was conservatives in the military. 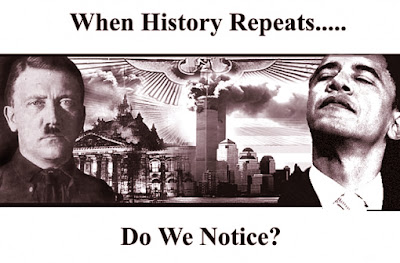 "17) He sued the state of Arizona for daring to enforce the most lenient immigration laws on the planet."

Another thing Hitler was know for- doing away with immigration laws.  Actually, Hitler had his own immigration scheme- forced slave labor for millions of Slavs.  That wasn't so lenient, since he worked most of them to death, but it's just like Obama.  Somehow.


Just like Hitler, who hated the German military.  Oh, wait...

Well, enough of that.  Obama is just like Hitler.  I'm sure you can see that now, and will remember it the next time Obama stages a phony government shutdown.

Jerry Critter said…
You would think he could come up with at least one true reason. Let's see. How about both Hitler and Obama are male?
December 3, 2013 at 2:36 PM

Green Eagle said…
Infidel, that question deserves an answer. I'll try to give my explanation of that phenomenon in the next day or two.
December 3, 2013 at 7:35 PM

isaac said…
Wow, I can't believe they managed somehow to miss the most glaringly obvious similarity between Hitler and Obama...

How could they forget to mention all the millions of Jewish people Obama rounded up and gassed to death?
December 3, 2013 at 9:01 PM

Anonymous said…
It would have made more sense to do one on how Hitler and Charlie Chaplin are similar. At least you could get to one true one and only have ninety-nine lies.
December 13, 2013 at 5:58 AM