October 11, 2013
These things are coming so fast and furious now, that Green Eagle feels the need to start a new series to deal with them.

As is becoming increasingly clear even to some members of the mainstream press, such as Bill Moyers, the right in this country is currently in the process of fomenting an insurrection designed to destroy whatever semblance of democratic rule is left in the United States.  They are still in a stage where they are attempting to accomplish this through bullying and economic sabotage, but the threat of violence always lurks in the background.  A perfect example was the gun-owners' march on Washington promoted by a (now-former) police chief from Pennsylvania, who insisted that his plan to have a million armed right wingers show up in Washington was entirely peaceful, and any trouble that resulted would be solely the fault of Obama and the government.  Of course, up to now, these events have been colossal failures, producing little more than the few laughs that Green Eagle and others have gotten out of them.  However, it is my fear that, as it becomes increasingly clear to more and more right wingers that they will never succeed in forcing their theocratic dictatorship on the country through legal means, they will inevitably move on to worse and worse displays of their anger, until it takes some really ugly scenes to put them down.

Here are a couple of the latest proposed events which their organizers hope will mark the beginning of a rebellion which they fantasize as in the mold of the American Revolution, but which, of course, have far more to do with the Southern war of treason of the 1860's.

The first is being promoted by Larry Klayman, a former Reagan administration employee and the self-appointed head of an organization called Judicial Watch, which specializes in filing tendentious, and almost inevitably rejected, lawsuits against Democrats.  He filed 18 against Clinton, for example.  He was also deeply involved in the "Swift boat" smears against John Kerry, and has been a key actor in the birth certificate nonsense, where his lawsuits have been unceremoniously tossed out of court.

Well, Larry had a recent post at one of Green Eagle's favorite right wing sites, Renew America, which is getting some attention the last few days, so I am going to give you a taste.  Unlike my normal practice, I will link to it in case you want to experience it in all its glory.  Well, here's a sample:

"The events of this week, combined with the last five years of Obama's so called "phony scandals" and other outrages designed to subvert the rule of law and our freedoms as a whole – all in pursuit of his anti-Christian, anti-Semitic, anti-white, socialist Islamic agenda – are another reminder why the "Muslim in Chief" must be removed from office without further delay."


"A citizens' grand jury, with yours truly as its people's prosecutor, as you readers know, has not only indicted and convicted Obama for fraud over his lack of eligibility to be president, but also pending are indictments and more trials over his illegal misuse of the National Security Agency (NSA) to spy on, coerce and enslave Americans whom he despises and who stand in his way of totalitarian control of the nation. We also have pending civil class action lawsuits against him and his jack-booted thugs at NSA and its enabler, Eric Holder, regrettably our current attorney general. The U.S. Justice Department, now a cesspool of corruption under Holder and his master Obama, was my former employer when I was a federal prosecutor during the Reagan administration. Then, unlike today, there was still a modicum of integrity left in the government's legal establishment."

A modicum of integrity, as demonstrated by the out and out treason of the Iran Contra affair. In case you are not familiar with the phenomenon, a "citizens' grand jury" is a gang of self-appointed jackasses who have decided that they have the right to put people in prison for the crime of being sane.


"Obama and his minions are destroying the country and exposing us to unacceptable future annihilation at the hands of his Muslim brothers."

And who could argue with that?

Well, that will be a really exciting day, don't you think?  But wait, there's more!  With the humiliating failure of the Biker's march on Washington a few days ago, vehicle owners are apparently going to up the ante:

"'Truckers for the Constitution' Plan to Slow D.C. Beltway, Arrest Congressmen...Police must detain 'accessories' to 'treason' or truckers will, organizer says...

Tractor-trailer drivers will intentionally clog the inner loop of the Washington, D.C., beltway beginning on the morning of Oct. 11, according to a coordinator of the upcoming "Truckers Ride for the Constitution" rally...to seek the arrest of congressmen for allegedly disregarding the Constitution."


"Zeeda Andrews, a former country music singer helping promote the protest, said last week participants would present demands to congressmen – including the impeachment of President Barack Obama... "we're asking for the arrest of everyone in government who has violated their oath of office."

And here's Zeeda, singing one of her country masterpieces.  Zeeda apparently subscribes to the belief that Barack Obama and Osama Bin Laden are actually the same person.  That's the sort of clear thinking that we need to set the country back on the right track.

"(Earl) Conlon  (an organizer of the "protest") cited the idea of a citizens grand jury – meaning a pool of jurors convened without court approval – as the mechanism for indicting the officials.
"We want these people arrested, and we're coming in with the grand jury to do it," he said. "We are going to ask the law enforcement to uphold their constitutional oath and make these arrests. If they refuse to do it, by the power of the people of the United States and the people's grand jury, they don't want to do it, we will. ... We the people will find a way."


Man, the citizens grand jury again.  Say, it already is October 11th!  I wonder how the Truckers for the Constitution did today?

"Trucker protest hits Beltway but causes no major delays, authorities say...
There were police reports of about 30 tractor trailers with American flags and signs for their protest — “Truckers Ride for the Constitution” — driving at the same speed as the rest of traffic on the Beltway in Friday morning’s rush hour...The trucker protesters seemed to be but a mere blip on the traffic cameras of area police officials." 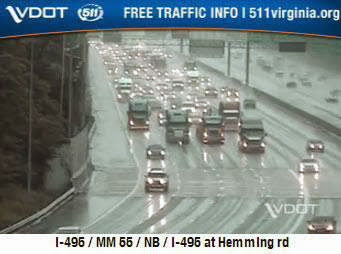 Whoops!  It looks like heavy rain caused far more delay than the truckers- all 30 of them.

Once again (as always) the teabag assholes have proven to be utter failures.  Think Larry Klayman will do any better?  Don't put any money on it.

Poll P. said…
Insurrection Watch, huh. Sorry we need it, but glad we've got it.