October 20, 2013
I've spent some time lately documenting the ludicrous "marches on Washington" which seem to be on the agenda of right wingers every few weeks now.  The phenomenon seems strange to us, because these events seem to inevitably fall laughably short of what we imagine it would take to alter the government's actions.

This is because of our perspective.  When liberals, or even moderates, think of large antigovernment demonstrations, what we inevitably remember are the marches on Washington of the civil rights era, and the anti-Vietnam protests of the late sixties.  These marches mobilized massive numbers of people, unprecedented in our nation's history, and did in fact contribute to reforming civil rights laws and ending our disastrous involvement in Vietnam.  When we compare the minuscule crowds attracted by the teabagger marches of late to these events, it seems preposterous that the wingnuts think they are going to change anything.

What we do not realize is that, in planning their activities, it is not these historical precedents that the right is looking to, but in fact an event that hardly anyone in this country outside of the hard right has ever heard of, but of which they are acutely aware- Mussolini's march on Rome, in 1922, in which a group of 30,000 or less actually did succeed in demolishing the existing government and replacing it with an avowedly Fascist one. 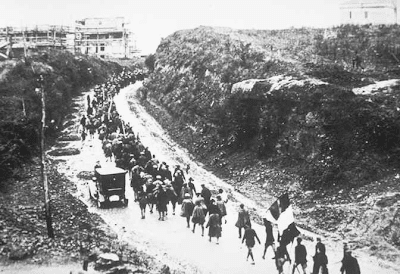 A view of the March on Rome, although there is a good possibility
that the event pictured here was actually taken after the Italian
government had capitulated.

Here's a little bit of history about this event:


"In November 1921, the fascist parties of Italy joined forces to create the Fascist Party. It became an official political party. In its October 1922 party conference, Mussolini said:  "Either the government will be given to us or will shall seize it by marching on Rome."

Mussolini, with the party’s hierarchy, drew up a blueprint on how to do this.

1. Fascists would be brought into Rome from all over Italy

2. All-important public buildings would be taken over including those outside of Rome in the important cities in the north.

3. Mussolini would demand the resignation of the government and that a new Fascist government be allowed to take over.

4. Armed Fascists would be near Rome. If the government failed to meet these demands, they would march into Rome and take over by the use of force.  The plan was grandiose if naïve. The military in Rome far out-numbered the Fascists who were poorly armed...

And as we know right wingers see Barack Obama as a weak, vacillating leader like Victor Emmanuel, who fell prey to the Fascist  plot, handing the leadership of Italy to Mussolini for 23 years.  Of course, it all ended like this: 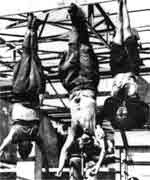 In fact, the march may have been far smaller than the 30,000 that seems to be the generally accepted number.  From a BBC article written on the eightieth anniversary of the march:


"The ironic fact about Mussolini's march on Rome in 1922 was that he and most of his black-shirted followers travelled to Rome from Milan by train, first class

There was no march.

But to satisfy his inordinate vanity, Mussolini, a master of propaganda, later created the myth of the march on Rome.  He inflated the figures from the reality of a few hundred black-shirts to a mythical army of 300,000 fascists led by him in person on horseback." 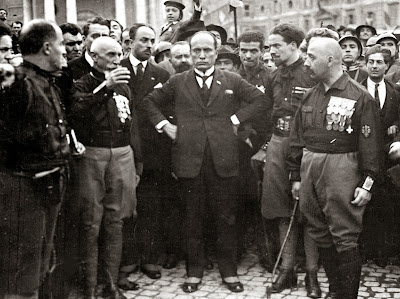 Mussolini "leading" the "march."  He sure did know how to pose
to make people think it was all about him.

This is the fevered dream of the right in this country today.  Here, for example is a reproduction of a Fascist poster from the right wing Stormfront site: 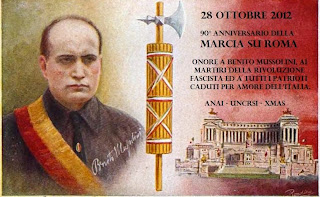 On the right, people are keenly aware of this, but Ted Cruz and his fellow travelers are sure that things will work out so much better this time around.  They have convinced themselves that a display of armed force by a few thousand resolute "patriots" committed to the rule of force can really dislodge the American government and replace it with what they are really after: a Fascist dictatorship; and that is what they are going to continue working toward, until their humiliations mount so high that they are swept away, or until this behavior ends up with them where they belong- alongside Mussolini, hanging by their feet in a gas station.

At this time I think the Oathbreakers and 3inch penis types aren't able or won't be able gird up their stand in weiners and attempt a takeover.

Personally, what worries me more are two other groups. The Sovereign Citizens and the gang members who joined the military, when the armed services lowered all sorts of barriers to fill the ranks for Cheney's WarWho are now employing their military training back on the streets against Law Enforcement.
October 21, 2013 at 9:17 AM

Green Eagle said…
As you may have noticed, I have also expressed a lot of concern about the Sovereign Citizens. They have demonstrated a propensity for violence again and again, and they form a bridge between "mainstream" conservatives and the world of Aryan supremacists. They make it easier for the Alex Jones listeners and the Ted Cruz fans to migrate into really extremist, violent behavior.

As for the gang members, I've thought for some time that one of the really amusing benefits to the great right wing rebellion is going to be when the militia jackasses that love to parade around in camo run up against the Crips and the Bloods. These are guys that don't need military training to be mindless, casual killers. The Aryans will be running for home, hiding under the bed and crying for mama.
October 21, 2013 at 12:29 PM