Well, Here's a Left Wing Conspiracy Theory, For a Change 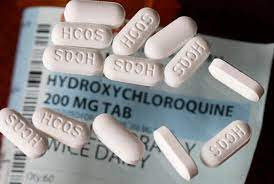 So, I do a lot of drawing and 3D modeling for work, and while doing it, I've gotten in the habit of listening to various podcasts.  Today, I heard one, episode 131 of a podcast called Minds of Madness.  It is about a guy who murdered his wife, and then pled not guilty because he had been driven into a state of psychosis by taking...ready for it?...hydroxychloroquine, to treat malaria.  Hydroxychloroquine!  Ever heard of that drug?

Well, no luck for him- the jury didn't buy it, but the story was enough to get me to spend a couple of minutes checking it out, and sure enough, there is a series of professional papers on the subject, going back several decades.  Here are a couple of quotes, with links to the articles, in case you are interested; there are lots more that you can find in a few minutes with a Google search:

"...in a recent study based on data from the FDA Adverse Event Reporting System database, there were 4,336 adverse event cases following the use of chloroquine, of which 520 (12.0%) reported neuropsychiatric adverse events. Exposure to chloroquine was associated with high reporting of amnesia, delirium, hallucinations, depression, and loss of consciousness..."

"Exposure to chloroquine was associated with a statistically significant high reporting of amnesia, delirium, hallucinations, depression, and loss of consciousness."

That last paper, from the National Institutes of Health, is particularly interesting, as it has a list of a number of known cases, identifying the specific mental conditions the drug seems to have induced.  Of particular interest to me was Capgras syndrome, a rare but real disease in which the patient decides that people around him have been replaced by substitutes.  In the course of writing Wingnut Wrapup over the years, I have reported numerous times on the persistent QAnon delusion that many national figures have been executed and replaced by clones.  Could this be not an example of right wing idiocy, but of drug induced psychosis?

And that leads me to my real conspiracy theory.  Could the use of hydroxychloroquine have been deliberately promoted by Trump and the Republicans because paranoid delusions like this cause the irrational fear and panic which make people so susceptible to their manipulation?  Is the inducement of psychosis by this drug, in this case, not a bug but a feature?  Are anti-vaxxers being deliberately driven mad, to make sure that they continue to be easy prey to Republican lies?

Anonymous said…
Teen Titans actually did this in the 90s, in a dystopian future where a mad god named Lord Chaos controls people with drugs that isn't really the future but a simulation that somehow connects to Hal Jordan (evil at the time) rebooting the universe. (So it means Chaos in the other sense of "that which existed before existence". Clever. The story's still bad.)
July 3, 2022 at 7:44 AM

John Benson said…
Fewer moving parts than any QAnnon conspiracy I've ever seen. From a raw probability standpoint it's more likely than Rocket Pizza's basement being the secret headquarters of the shadow government.
July 3, 2022 at 9:22 AM

Green Eagle said…
Thanks, John. I'm so used to having anything I say dismissed as total lunacy, that it is nice to think someone else might see some reason in it. That "dismissed as total lunacy" thing extends back at least to around 1990, when I started telling everyone that the Republican party was trying to replace our government with an oligarchic dictatorship. Nobody bought that one.
July 3, 2022 at 12:42 PM