A Case in Point

Today, I would like to present the story of one Herschel Walker, a perfect illustration of the degree that Republicans have abandoned all pretense of caring about maintaining the United States as a functioning country.

Those who follow Georgia politics will know that, two years ago, Democrats managed to take control of the Senate (fat lot of good it did in the face of Republican willingness to stoop to any sabotage to regain power) by winning the two Senate seats which our founding fathers, in their stupidity, awarded to the miserable State of Georgia.  One of the Democratic winners was a Jew, which was bad enough, but what really infuriated Republicans was that one of them was black- Raphael Warnock, a preacher who occupied the position once held by Martin Luther King, and a spellbinding speaker.  Well, that could not be allowed to stand, at least in the State of Georgia, so the Republicans immediately set about trying to find a candidate that could defeat Warnock.  Did they cast about for someone with a sterling legal or legislative record, or a history of public service?  Did they look for a brilliant scholar with an incisive understanding of federal politics?  Did they look for a person with a clear commitment to improving the lot of people of his State?  Of course not.  They just looked for a famous black man who was degraded enough that he would be happy to betray his fellow Black Americans, drawing enough votes from Georgia's presumably stupid black voters, to sink Warnock's Senate career.  And here is what they came up with- retired Heisman trophy winner Herschel Walker, one of the most well known black Americans, but without the slightest characteristics of a good legislator, or as you will see, of a decent human being.  No matter, he is who they picked. 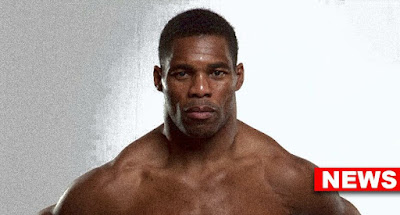 Walker's campaign was centered around his willingness to attack the supposedly vast numbers of absent and bad black fathers, which he blamed for the poor condition of black America, rather than the 400 year history of abuse they have suffered.  He traveled around, raving at every occasion about these miserable fathers.

Well, that worked fine for a while, I guess, until some things started to emerge that interfered with this narrative.  For example, Walker admitted having beaten his ex-wife.  Well, to a Republican that is hardly a crime.  Then, Walker was recently found to have one son, and then four children by various mothers, who he essentially abandoned. You could hardly find behavior more in utter contradiction to his pious religious claims.  Surprise!  Just like shingles in those TV ads, Republicans didn't care.  All they want is power, and they don't give a damn how low they have to stoop, what degraded tools they have to employ, to get what they want.

Well, this is just typical Republican contempt for right and wrong, but now Herschel Walker's story has taken a real turn into the gutter.  I heard today a story that Herschel Walker suffers from dissociative identity disorder, known to the general public as split personality; he has as many as twelve different ones.  I googled "Herschel Walker multiple personality" and within minutes found literally hundreds of articles about this, dating back at least as far as 2008, when Walker admitted to having this condition, one of the most severe mental diseases known to man.

Obviously, the Republican party knew all about this.  They just didn't care.  If they could replace a Democratic Senator with a Republican one, they didn't care that their choice was a violent madman.

"(former Dallas Cowboys quarterback Danny) White, who described Walker as a friend, said he last saw him last year at a flag football game in Dallas and he "seemed his normal self."

Which normal self, I wonder.  Which of his twelve personalities will show up any given day to vote on vital legislation?  Could anything show more starkly Republicans' willingness to sacrifice anything to their lust for power?  This is a party gone absolutely mad- as mad as Herschel Walker himself- and like Walker, not one of them has the slightest right to be near the levers of power.  It will be interesting to see how this will be handled, or if the Republicans will just ignore it and go on using Walker in an attempt to destroy Raphael Warnock, regardless of the price the country might have to pay.

Green Eagle said…
Gene, the problem is that by the time you went and got it for him to see, you would be talking to a different Herschel Walker.

By the way, it's now a couple of days since I first saw the initial story about this monumental outrage, and the mainstream press seems to be totally uninterested in it.
June 28, 2022 at 10:31 PM