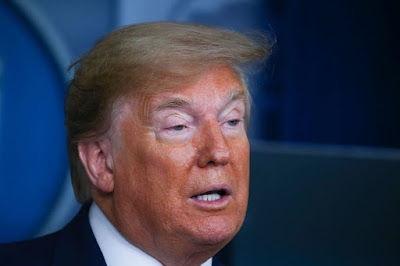 I saw this picture at Daily Kos, where they were commenting on the size of Trump's pupils in a brightly lit room, and wondering just how wasted on drugs he really is.  Well, I buy that, but I have another question.  This guy is the President of the United States, and claims to be worth ten billion dollars.  The whole idea of a President wearing makeup every day is revolting to me, but really, why can't he get someone that can apply it properly?  I mean, Melania would never go out with makeup that crude.  Couldn't he at least get her to do it? The area around his eyes looks like he was sunning himself in a Lone Ranger mask, and can't they ever get that sickening orange glop to go up to his hairline on the sides?  Really, what is the deal with this?

M. Bouffant said…
He does it all himself. (And thinks it looks great.) That's part of why he never gets to "work" until noon.

Unknown said…
Marriage restoration..Stop your marriage from breaking apart today. I lost my husband to another woman 2 weeks ago after 27 years of marriage . We had a lovely marriage but he started a relationship with a co worker who chased after him . He is living away near his work and her and refuses to talk to me or to come home . I am devastated and am finding it hard to cope . I wish I did not love him and that I could move on but I can't . I don't know how to stop feeling like this I wish I didn't as its eating me away and I m starting to feel ill. I have degraded myself begging him to come home all to no avail. I became very worried and needed help. As I was browsing through the internet one day, I came across a website that suggested that Chief Dr Lucky can help solve marital problems, restore broken relationships and so on. So, I felt I should give him a try. I contacted him and he did a spell for me. two days later, my husband came to me and apologized for the wrongs he did and promise never to do it again. Ever since then, everything has returned back to normal. I and my family are living together happily again.. All thanks to Chief Dr Lucky. If you need a spell caster that can cast a spell that truly works, I suggest you contact him. He will not disappoint you. if you have any problem contact him, I give you 100% guarantee that he will help you, This is his details,Email him at: Chiefdrlucky@gmail.com you can also call him or add him on Whats-app: +2348132777335 Website :  http://chiefdrluckysolutionhome.website2.me/