There's Actually Another Name For That

"The Trump administration is making preparations to hold immigrant children on military bases, according to Defense Department communications"


There's another name for that, as I am sure you know:  concentration camps. 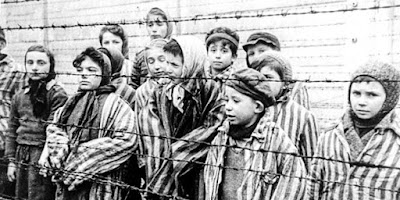 Coming to a country near you.

Next time some right wing jackass tries to tell you that the Republican party is not on the way to turn this country into a replica of Nazi Germany, remember this.  And then tell them to fuck off, when they tell you that it's only for illegal immigrant children, so it's okay.  "First they came for the Jews," and all that.

The big difference this time around? Instead of finding some poor sociopath to play the role of Hitler, they picked one of their own, to see that no subhuman action of their was allowed unless a rich guy made a huge profit off of it too.  That makes it twice as good, as far as they are concerned.

Here's a little excerpt from an article about a concentration camp for children in Lodz, Poland, run by the Nazis:

"During the German occupation, a concentration camp for children was established in the city of Łódź...Where did the terrible idea of setting up a children’s camp come from? Shortly after entering Poland, Germans became aware of the issue of orphaned and homeless children.  From 3,000 to 5,000 children were imprisoned in “Little Auschwitz.”


Don't allow yourself to think for one second that this is going to end up any different, if the Republican party is not crushed.

Magpie said…
I have argued with Americans who see nothing wrong in letting even American kids die if their parents cannot afford essential medical treatment... because to save them would be "socialism".
Others try to say that is not what their attitudes imply... but it is exactly what their attitudes imply.
There is a frightening preparedness to just not give a fuck about other people, because somehow that would be seen as 'weakness' or intruding on their 'freedom'. It's warped.
May 16, 2018 at 3:30 AM

Professor Chaos said…
I can't believe they aren't even trying to cover their asses on this one. They aren't even clsimi,g that it's fotvthe safety of the children or ehatever, they are just flat out saying that being unspeakably cruel to children and parents is the goal. To discourage others from trying to ctisd the border. Its really frightening how quickly we got to this point.
May 24, 2018 at 9:14 AM

Green Eagle said…
It is frightening, as it is frightening that so few people in the country seem to be aware of how close to fascism we have come, or even seem to care.
May 24, 2018 at 5:45 PM