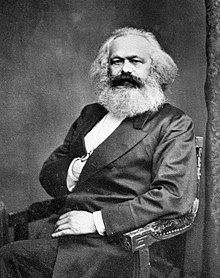 For those who have not noticed (that would be just about everybody) today is the 200th birthday of Karl Marx.

If you have never read any Marx, or if it is a long time and you don't remember much, I want to strongly recommend that you read some of Das Kapital, or the Communist Manifesto.  I am not for one second going to argue in favor of Communism- its history shows that it depended on some utterly implausible ideas about the perfectability of humankind that Marx got from Hegel, and which turned out to be totally groundless.  Instead, just read his analysis of Capitalism and where, in 1850 or so, he saw it headed.  I am convinced that you will find what he has to say chillingly prophetic- probably the most accurate long range economic prediction in history.  It is a deeply disturbing read, and well worth your time.

Magpie said…
Agreed. It's an interesting read to see someone grappling with the issues early, even if you don't go where he goes.
May 6, 2018 at 4:01 AM