In this chapter, I want to continue with another right wing predecessor of today's Conservative movement, who was massively popular in the thirties through the fifties, but who has been virtually pushed out of the historical record at this point:  Gerald L. K. Smith.  Like Billy James Hargis and Father Coughlin, he started out as a religious figure, and over a period of years migrated into politics, promoting a political viewpoint which I believe will be familiar to anyone watching the Republican party of the last few decades, although perhaps in a less varnished form.  I mention this because it is important, I believe, to understand that the current view that the Republican party has somehow coopted the Evangelical movement is actually backwards- standard American Conservatism actually grew out of Evangelical Christianity and has been manipulated by it, not the other way around.  Anyway, decide for yourself. 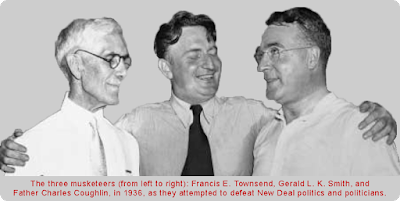 Smith was born in 1898, and spent the early part of his adulthood as a preacher.  He met Huey Long in 1929, and worked for Long until Long's death in 1936, after which he struck out on his own. After Long was assassinated, Smith took over leadership of Long's "Share our Wealth Society" for a short time, during which he steered it toward an overt anti-Semitic platform.  I'll quote Wikipedia about his subsequent activities:

"In 1944, Smith formed the America First Party, essentially appropriating the name. He became a member of William Dudley Pelley's pro-Nazi Silver Shirts organization, which was patterned after Hitler's brown shirts..."


Pelley who was later convicted for violating the Espionage Act in 1942 and sentenced to 15 years in prison, is due for his own chapter in this series.


"The Cross and The Flag was an eight-page monthly magazine founded in April 1942 and published until December 1977. Reverend Gerald L. K. Smith was editor and publisher. The publication was started to replace Father Coughlin’s Social Justice magazine which was banned in 1942 by the Justice Department from the mails...Smith wrote the vast majority of the articles in the publication.   "The Cross and The Flag" was a common phrase and reference used by the Ku Klux Klan in the 1920s and 1930s...The Cross and the Flag regularly ran articles with titles like “The Satanic Will to Mongrelize,” “The Tolerance Racket,” “The Black Devil of Race Destruction,” and “The Brotherhood Bunk.” 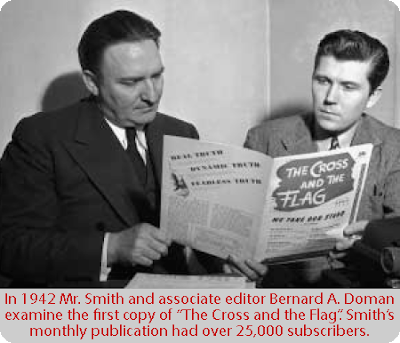 In the late 1930's, Smith moved to Detroit, where he was befriended by Henry Ford, author of the infamous early 1920's book "The International Jew," a viruently anti-Semitic work which was a major influence on the thinking of Adolf Hitler.

To quote "The Cross and The Flag:"

“The day came when I embraced the research of Mr. Ford and his associates, and became courageous enough and honest enough and informed enough to use the words: ‘Communism is Jewish.’”


His adjective-laden sentences with their hard hitting analogies and humor was hateful to all liberals. He was living in a world controlled by far left villains and jewish conspiracies."

By the way, please note that, even at this time, angering liberals was as much a goal of the right as anything else.  Even in this, the behavior of modern day right wingers has a history that stretches back far beyond Reagan.


Too get a feeling for those "adjective-laden sentences," I want to recommend that you watch this one minute excerpt from a speech delivered by Smith in 1936:

Notice first of all the similarity in speaking style to that of a man for whose ideas Smith had tremendous sympathy, Adolf Hitler.  But even more importantly for our purposes, pleas note the glorification of the rural masses coupled with a threat to forcibly take back the supposedly stolen government, which is a clear precursor to the central propaganda line of the current Republican party.

Smith's active career continued through the fifties, incorporating an extreme form of holocaust denial and similar anti-Semitic tropes, along with the now-standard hostility toward black Americans, and anything with the slightest hint of liberalism. 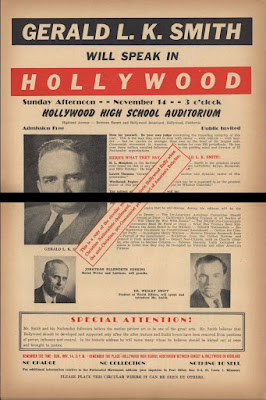 And here is a specimen of the sort of publicity issued by Smith's organization.
Sorry about the gap in the middle- the only readable copy of this I could find
was in two pieces, with a little missing between them.

I am going to depart from my normal style here, and devote most of the rest of this piece to excerpts from a piece written by Smith:

The first principle for which we stand is: Preserve America as a Christian Nation being conscious of the fact that there is a highly organized campaign to substitute Jewish tradition for Christian tradition.


Safeguard American liberty against the menace of bureaucratic Fascism...Fascism, as we now have it, is confiscating independent wealth by way of the income tax and destroying the liberty of the States by way of the Supreme Court. At this very moment we face the risk of a nine-man Fascist dictatorship, posing as the Supreme Court of the United States, completely contrary to our Constitutional traditions.


Fight mongrelization and all attempts being made to force the intermixture of the black and white races...Subversive forces, exploiting sentimental nitwits, are reading into the Constitution a code of conduct which threatens to mongrelize our race, destroy our racial self-respect and enslave the white man.


America has given away her reserves. We have bankrupted our economy. Our national debt, our state and local government debts, plus our personal debts far exceed the assessed value of every visible piece of property in the United States. This epidemic of economic blood-letting began at a time when Jew internationalists, in control of propaganda , almost convinced a majority of our people that it was subversive to use the term America First.


Oppose a World Government and a Super-State...We believe that the whole U. N. project is a subversive conspiracy to destroy our independence.  The original designer of this subversive Charter fought to give us a complete World Government in which America would be only a voting state


Safeguard America's tradition in relationship to immigration...The same conspirators who would destroy our Nation and its independence by treason from within, or by the establishment of a World Government - these same forces are ready to let down the bars and admit the Asiatic, African and European multitudes.  This campaign to destroy our immigration tradition is supported by every Jewish and Communist organization in the world...if the wall ever breaks we will be invaded and destroyed without the firing of a shot, merely by the act of indiscriminate admission of aliens to our shores."


I think I hardly need point out that, with his racism, his hatred of immigrants, his opposition to the United Nations, his obsession on the national debt, his attacks on judges, his claim that the United States is a Christian nation, his railing against "bureaucratic fascism," i.e. government regulation, Smith shows himself to be in almost perfect accord with the platform of the post-Reagan Republican party.  In this, he is a perfect illustration of the morphing of the intolerance of early twentieth century Evangelical Christianity into the ideological basis of American Conservative thought.  At the risk of being repetitive, let me point out that this loathsome political movement grew out of Evangelical Christianity.  It was Evangelical Christianity that manipulated the Republicans into becoming the party of hate, not the Republicans who manipulated Evangelicals into becoming a religion of hate.


"I’m an evangelical and stand with many other evangelical who do not believe policies that divide, destroy and have a disdain for the least of these is evangelical." - Rev. William J. Barber II, one leader of the Moral Monday movement.

Open up your heart and let the SPIRIT in!

Listen to the music and experience the feelings it brings. Learn how Christianity can affect you.

Watching the clip, I immediately thought Smith's speaking style was just like Hitler's, even not having looked down to see you make the same observation. These shitheads have always claimed to be super-patriots while taking inspiration from foreign sources, whether Hitler back then or Putin today.

standard American Conservatism actually grew out of Evangelical Christianity and has been manipulated by it, not the other way around.

I've always thought this. It's basically a theocratic movement, and Christian supremacism has been a core part of it going back to the KKK.

I've seen that photo of Smith and Doman looking at the first issue. Of course the same kind of stuff is still being posted on dark corners of the internet.

I see evangelical Christianity as something that originated in England, and led to the English Civil War and the dictatorship of Cromwell. So it is by definition very largely a white phenomenon. I don't know what kind of desperation drove a number of black Christians to align themselves with this movement, but to me it was always primarily a white thing.

And can I just say, Sam, I clicked on your link. It leads to one of the most abominable misuses of the human voice I have ever heard. I recommend that everyone give it a try.

As for the comparison with Hitler, the next part in this series features a video comparison of Father Charles Coughlin speaking, and Hitler. I think the comparison there is even more frightening.

Green Eagle - Most historians of evangelical Christianity trace its origins back to the 1730s, originating in both Great Britain and New England. The Puritan movement, which led to the English Civil War and Cromwell, was one of its forerunners. The wikipedia page on Evangelicalism provides a good introduction.

The four beliefs listed under characteristics - conversionism, biblicism, crucicentrism, and activism - form the Bebbington quadrilateral, which is the primary framework used for academic studies of evangelicalism. None of these beliefs necessarily lead to a particular political position.

Look back to the 1730s and 1740s. Some major figures of the movement, including Jonathan Edwards and George Whitefield, owned other human beings. That warped their theology - while they said men were spiritually equal, they also built their beliefs around white supremacy.

White evangelicals would have imposed their beliefs on their slaves. The "spiritually equal" part was attractive to Blacks. The white supremacy, not so much. Black evangelicalism was opposed to slavery, and thus contained a social justice component from the beginning.

This brings us back to Rev. William J. Barber II. He is, as he says, an evangelical. He was also president of the NAACP's North Carolina chapter for the past decade, and the Moral Mondays/Forward Together movement he established is opposed to pretty much everything the Republican Party stands for.

Hence, I use the labels "black" and "white." (Thanks to Fred Clark at Slacktivist to helping me see this.)

Geez, he could give that identic speech at C-PAC and fit right in.

Professor, thanks for that remark. My whole point in writing this series is to make just that point- that what has happened to the country at the hands of Conservatives is not a product of Trump, or even Reagan- they may be slicker than people were in the past, but the same things that are so deplorable about them existed decades ago.

Zog, I want to say that I am very familiar with the tracing of the Evangelical movement back to the 1730's, but it is my belief that under whatever name, it has existed at least since shortly after Henry VIII broke the Anglican Church off from Catholicism. Almost immediately a rigid form of Christian doctrine manifested itself. It is this doctrine which was responsible for Cromwell, and for the even more extreme Christian elements who were so intolerant of other viewpoints that they left England altogether, to come to the United States.

1) My last name is not Waller.

2) This version of Christianity certainly affected me - I wanted to throw up.

3) Does the SPIRIT Waller refers to come from a liquor store?