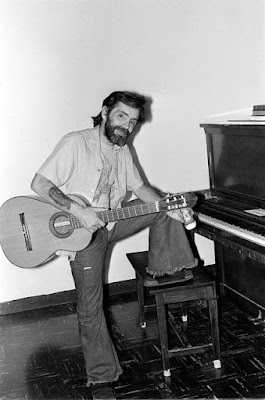 Charlie had sort of loomed over us for most of our lives, an infamous, creepy, horrible and yet somehow attractive figure who etched himself permanently into American culture by acts he incited over two days in the sixties.

What has occurred to me in thinking about it is how Charlie, in a strange way, was a symbol of a much more innocent time.  These days, we have people in this country committing atrocities far worse that Charlie did, on a weekly basis, only for them to be virtually forgotten about as the next monster heaves into view.  The Las Vegas shooter, the Texas Church shooting, the Northern California guy spraying fire at a random elementary school- all in the last month or so.  And we just move on, while Charlie managed to frighten us for forty years.

Mass murder isn't what it used to be, and in this Republican age, when the dominant political party deliberately stokes the kind of rage and hatred that produces these acts, it has been debased from a monstrous act to just another in an endless string of quickly forgotten tragedies.  One more little price we pay for allowing rich people to run everything.

Magpie said…
I don't feel anything for Manson except the same reaction I would feel for a rabid dangerous dog beyond any point of bringing back.
It is interesting to contrast, however, the choices of Manson with one of his intended victims: Steve McQueen. Both had catastrophic upbringings but one become the most successful actor of his day and the other a reviled serial killer.
And you're right about the times in which we live. Or rather in which you live. The society I live in has its problems, but America has a whole other level of sickness. And a vast proportion of the population commits itself to accepting that sickness as the price of a freedom it doesn't even have, blindly and resolutely telling itself it is the best the world has to offer, and yes one party of a two party system is vastly, overwhelmingly, more complicit.
I don't say that about America as a put down, not at all, but as commiseration for a great people living in a great country that has been swindled out of a better present and perhaps any good future.
November 21, 2017 at 12:52 AM

Green Eagle said…
Of course, I don't feel anything positive toward Manson, I am just interested in the impact that this objectively unimportant person managed to have. I feel it necessary to say this because I understand that there are people out there that are glorifying Charlie, for some strange reason. This is not an unknown phenomenon in this country, of course. During the Depression many people made heroes out of John Dillinger, Bonnie and Clyde, Ma Barker's gang and other violent criminals.

Here's an interesting fact about Charlie. Charlie learned to play guitar while in prison, from Alvin "Creepy" Karpis, the last survivng member of the Barker gang, and a former number one most wanted criminal. If only Karpis had taught him a little better, he might have gotten a record contract, and vanished into Rock and Roll obscurity.
November 21, 2017 at 10:54 AM

joseph said…
It is not Manson, but his followers that interest me. What is the psychological makeup of a person that allows him or her to become a follower of a narcissistic sociopath? And the similarity to Trump voters is quite obvious.
November 21, 2017 at 12:48 PM

Green Eagle said…
Well, Joseph, I've always felt the same about Hitler, who was really a boring little jerk when you get down to it. The real interest lies in what made so many people fall for him. And Charlie was nothing but a very inferior sort of would-be Hitler, when you come down to it.
November 22, 2017 at 8:30 PM