August 09, 2017
From right wing convicted felon (and therefore admired leader of the wingnuts) Dinesh D'Sousa, another strike against the truth, in the form of this new book: 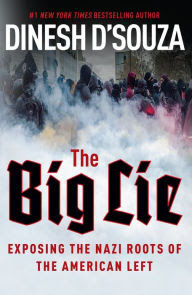 Yes, it is the contention of this hateful monster that it is the American left, not the right, that is actually the real cousin of the Nazis.

D'Sousa seems to forget the years-long campaign by the Democrats, led by Franklin Delano Roosevelt, to get the United States to take a stand against the Nazis; a campaign that took years because it was viciously opposed every step of the way by a large number of Republican politicians, who violently fought even aiding Britain in its struggle against Hitler, let alone our joining in too.  He parrots the nauseating lie that the Nazis were left wingers, despite the incredible, detailed historical record, including the text of large parts of Mein Kampf, proving that the Nazis opposed not just Communists, but Socialists, liberals and even centrists, and the fact that the Nazis joined together with virtually every nationalist, right wing group in Germany, before destroying them as soon as possible.

This hateful book is, of course, just one more step in the disgusting propaganda campaign that produced the following book several years ago: 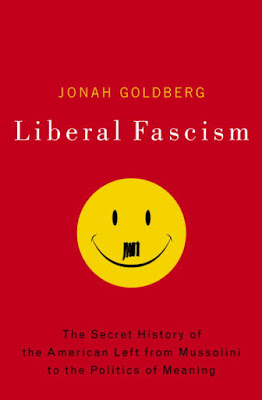 This was another publication in the right's long campaign to deny their relationship to the Nazis, and despite being equally bankrupt of both fact and decency it was eagerly consumed by the wingnuts.

And yet, right wingers will lap up this new outrage, because of course they will.  Because "nyah nyah nyah, not me, you" has become their standard response to any attempt to point out what a malignant bunch of subhumans they are.

Green Eagle said…
Thanks. I see you corrected your mistyping, but I'm sure we all get the point, and I appreciate your comment.
August 10, 2017 at 12:21 PM

Pinku-Sensei said…
Ah, yes, Dinesh D'Souza, who had the dishonor of not only being an ex-con, but of producing "Hillary's America," which outstunk "Batman v Superman" for Worst Picture of 2016. He also won the Razzie Awards for Worst Actor and Worst Director for playing himself, which says something about what an awful person he is and how much of that comes accross on screen. Not only is he not original by merely intensifying what Jonah "Doughy Pantload" Goldberg wrote, which is itself not original to Goldberg (I used to be a Republican and considered myself a conservative before 2000, so I recall people on the right asserting that Fascism was an outgrowth of Socialism in the 1990s), but he has really terrible timing to have this book come out when there are actual Nazis marching in American streets as part of a "Unite the Right" rally and praising Donald Trump. That won't stop the target audience from buying the book; they want to believe its thesis despite the evidence not supporting it. Sigh.
August 13, 2017 at 9:27 AM

Anonymous said…
"...viciously opposed every step of the way by a large number of Republican politicians...."

Not wanting to resist Hitler was tantamount to enabling Hitler, and there was a slogan that the Hitler-enablers used: "AMERICA FIRST." Does this sound familiar?

To paraphrase the comment in The XVIII Brumaire of Louis Bonaparte on historical events and characters, they recur "...the first time as tragedy, the second as farce.” If Charles Lindbergh in 1940 was a tragic figure, Dinesh D'Souza today is most farcical.
August 15, 2017 at 7:13 AM

Professor Chaos said…
Boy,the organizers of the "unite the right" rally must feel awfully foolish about having invited all these "leftist" groups!
August 15, 2017 at 9:16 AM

Green Eagle said…
Lindbergh was a tragic figure? Maybe for the kidnapping, but otherwise, he was someone who was born to relative wealth, was turned into a hero for something he did that lasted less than one day of his life, and then used his status to advance the image of the Nazis. Not really that tragic, in my opinion.
August 15, 2017 at 9:52 AM